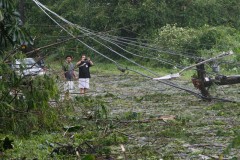 In early August 2014, the collective islands of Hawaii faced two back-to-back hurricanes that threatened severe damage.  Derrill Holly of Electric Co-op Today reported on the efforts of Hawaii’s only electric cooperative, which moved quickly to handle outages caused by hurricane Iselle and braced for more potential problems from Hurricane Julio, which eventually spared the islands.