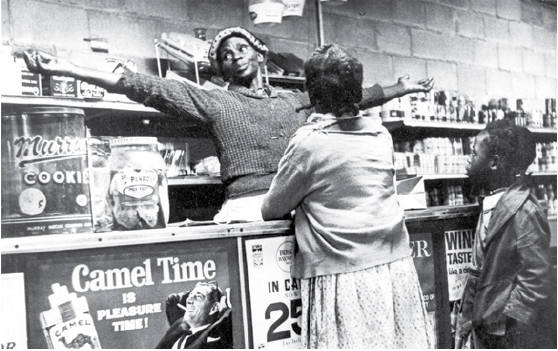 What began in that co-op was a Citizenship School to teach blacks on Johns Island, South Carolina how to qualify to vote. Later, the Southern Christian Leadership Conference (SCLC) spread that program throughout the South. That one class in the co-op became thousands of classes in churches, schools and homes. In 1962, the SCLC brought in other groups who then formed the Voter Education Project (VEP). Between 1962 and 1966 VEP trained 10,000 teachers for Citizenship Schools and 700,000 black voters registered throughout the South.  By 1970, another million black voters had registered.

Aldon Morris in his book, “Origins of the Civil Rights Movement,” wrote: “…the Citizenship Schools were one of the most effective tools of the movement.” That class at the co-op led to millions of blacks voting for the first time and as a result the South and US history were changed.

The co-op was called the Progressive Club. Johns Island is one of the Sea Islands, home to the unique Gullah people who had retained a lot of their African cultural heritage. In the 1940’s Johns Island was remote and a nine-hour ferry ride to Charleston, SC. After WWII, bridges slowly began to connect Johns Island to the mainland.

The Progressive Club was started in 1948 by Esau Jenkins and other Johns Island residents as both a consumer co-op and a mutual aid organization. About forty families started the co-op. The co-op bought an old school building on River Road that sold everything from groceries to gasoline and seed to feed. The members used it to trade goods and services and as a mutual aid program to help each other in time of need.  Every member of the Progressive Club had to be a registered voter and had to pledge to get one or more voters out to vote on Election Day. A little later, Esau and others organized the CO Federal Credit Union (still operating) to serve low income blacks who could not get mortgages or loans.

In his business life, Esau Jenkins ran a bus service which served the needs of high school students and daily workers going from the island to downtown Charleston. One day, in the 1950’s one of the passengers, Alice Wine, said to Esau Jenkins, “I’d like to hold up my head like other people, I’d like to be able to vote. Esau, if you’ll help me a little when you have the time, I’d be glad to learn the laws and get qualified to vote. If I do, I promise you I’ll register and I’ll vote.”

Esau Jenkins heard her plea. He copied off the laws and handed them out to his passengers.  He began a daily custom of teaching them how to read and write and learn the law while he drove the bus. Blacks could not get the vote in South Carolina unless they could pass the literacy test. Alice Wine was the first of his passengers to register to vote. What Esau Jenkins was teaching on the bus to a few passengers he wanted to make available to all the disenfranchised blacks on the Sea Islands. But how?

Another avenue for Esau’s road to democracy was about to be opened by Septima Clark.

In 1953, Septima Clark, an activist Charleston teacher learned about the Highlander Folk School in Tennessee as one of the few places in the South where blacks and whites could meet together. The Highlander Center was modeled after the Danish Folk Schools which themselves spurred the Danish cooperative movement.

Septima had taught on Johns Island and Esau had been one of her students. In 1954, Septima went twice to the Highlander Center. There she met the founder Myles Horton and his wife Zilphia who that summer came down to South Carolina, to Johns Island to learn about what was going on.

In 1955 & 56, Septima taught a leadership class at Highlander. She used her car to transport three groups of people there from the Charleston area, including Esau Jenkins. During his time at Highlander, Esau Jenkins saw that a combination of the Highlander teaching technique and his rolling bus classroom was the next step. Esau saw also that Septima Clark was an exceptional teacher of the Highlander method. Propitiously, Bernice Robinson, a cousin of Septima, was another of the Charleston attendees. Jenkins asked Highlander to help merge the two formats and sponsor a Citizenship School on Johns Island.

Highlander lent the funds to the Progressive Club to buy land on Johns Island to build a new larger co-op store.  The new store was built nearby on River Road and opened in 1963. (The building still exists and is now on the National Register of Historic Places).  At the front of the co-op’s building was the retail shop with a store room behind it that acted at night as a meeting room. Behind that they built a dormitory to house participants from afar and also an indoor basketball court. There amongst the weighing scales and storage counters democracy for many blacks in the South was born. Alice Wine became one of the cashiers at the co-op and she can be seen in a lot of the historic photos.

Septima Clark is one of the most unsung heroes of the civil rights movement. (In 1955, Septima invited Rosa Parks to her class at Highlander. Just months before she refused to give up her seat on that bus in Montgomery, Alabama). In 1955, the State of South Carolina passed a law stating that teachers who were members of the NAACP would not be allowed to keep their jobs. Septima Clark would not leave the NAACP and in 1956 she lost her teaching job in Charleston. Myles Horton learned that Septima had been fired and asked her to become Director of Workshops at Highlander as well as the Highlander’s liaison with Esau and the Citizenship School.

In “Ready from Within,” Septima Clark comments about the co-op store, “…Esau’s group fixed the front part like a grocery store and sold things to themselves …There were two rooms in the back and in those two rooms we taught. We didn’t want white people to know we had a school back there. We didn’t have any windows…”

Brought in to be the regular teacher at the Progressive Club was Bernice Robinson, the young cousin of Septima Clark who had also attended Highlander. Highlander raised funds to pay for the program and had Septima Clark oversee it. Soon the Marshall Field Foundation in Chicago took an interest in growing the program beyond Johns Island.

However, at this time the State of Tennessee decided to use illegal tactics to close down Highlander. As a result, Highlander was closed and all its properties and assets sold by the local sheriff at auction. To protect the Field grant and the Citizenship School program, the Highlander quickly transferred the funds and the program to the Southern Christian Leadership Conference (SCLC). Septima Clark, Bernice Robinson and others were transferred with it. Andrew Young and Dorothy Cotton were asked by the SCLC to grow the program beyond Johns Island to the rest of the South.

Young and Cotton, and many other civil rights leaders, were still taken to the Progressive Club to see how the program best worked. On her way back with other Mississippi voting rights activists from their visit to the Citizenship School Fannie Lou Hamer was infamously beaten up in Winona, Mississippi.

“We Shall Overcome” reminds us of the accomplishments of that simple Citizenship School humbly created in a co-op shop that became one of the greatest stories of the Civil Rights Movement.

David J. Thompson is writing a book about, ”The Role of Cooperatives in the Civil Rights Movement.” He visited the Progressive Club store about 1996 when it was covered in vines and almost forgotten.