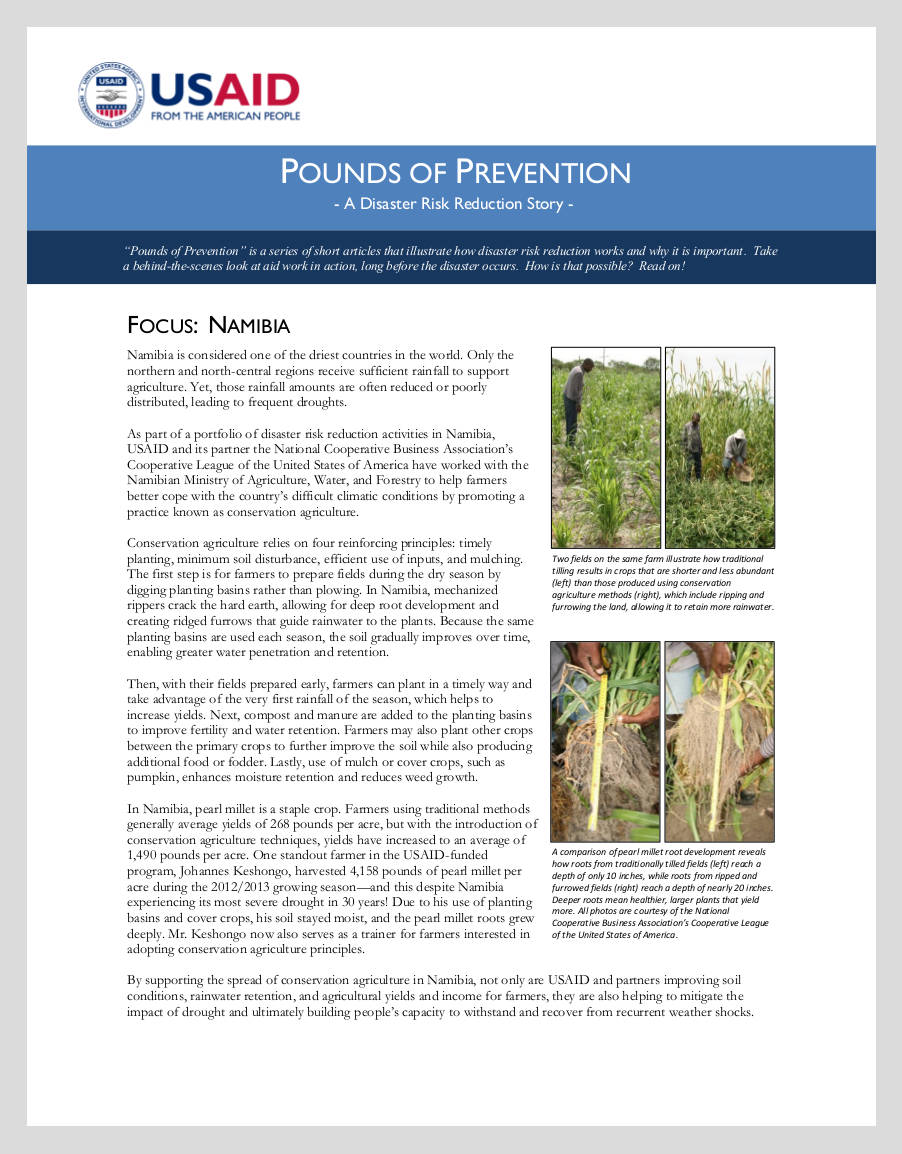 The U.S. Agency for International Development’s (USAID)“Pounds of Prevention” is a series of short articles that illustrate how disaster risk reduction works and why it is important. Take a behind-the-scenes look at aid work in action, long before the disaster occurs. How is that possible? Read on!

Namibia is considered one of the driest countries in the world. Only the northern and north-central regions receive sufficient rainfall to support agriculture. Yet, those rainfall amounts are often reduced or poorly distributed, leading to frequent droughts.

As part of a portfolio of disaster risk reduction activities in Namibia, USAID and its partner the National Cooperative Business Association’s Cooperative League of the United States of America have worked with the Namibian Ministry of Agriculture, Water, and Forestry to help farmers better cope with the country’s difficult climatic conditions by promoting a practice known as conservation agriculture.

Conservation agriculture relies on four reinforcing principles: timely planting, minimum soil disturbance, efficient use of inputs, and mulching. The first step is for farmers to prepare fields during the dry season by digging planting basins rather than plowing. In Namibia, mechanized rippers crack the hard earth, allowing for deep root development and creating ridged furrows that guide rainwater to the plants. Because the same planting basins are used each season, the soil gradually improves over time, enabling greater water penetration and retention.

Then, with their fields prepared early, farmers can plant in a timely way and take advantage of the very first rainfall of the season, which helps to increase yields. Next, compost and manure are added to the planting basins to improve fertility and water retention. Farmers may also plant other crops between the primary crops to further improve the soil while also producing additional food or fodder. Lastly, use of mulch or cover crops, such as pumpkin, enhances moisture retention and reduces weed growth.

In Namibia, pearl millet is a staple crop. Farmers using traditional methods generally average yields of 268 pounds per acre, but with the introduction of conservation agriculture techniques, yields have increased to an average of 1,490 pounds per acre. One standout farmer in the USAID-funded program, Johannes Keshongo, harvested 4,158 pounds of pearl millet per acre during the 2012/2013 growing season—and this despite Namibia experiencing its most severe drought in 30 years! Due to his use of planting basins and cover crops, his soil stayed moist, and the pearl millet roots grew deeply. Mr. Keshongo now also serves as a trainer for farmers interested in adopting conservation agriculture principles.By supporting the spread of conservation agriculture in Namibia, not only are USAID and partners improving soil conditions, rainwater retention, and agricultural yields and income for farmers, they are also helping to mitigate the impact of drought and ultimately building people’s capacity to withstand and recover from recurrent weather shocks.