Cristina Pulseira is leading a session with her neighbors. Digging up the soil to show them the difference from one side of her farm to the other, she holds warm, soft soil, almost like compost, in one hand; in the other hand, the soil is dry, closer to dust. Her farm is right off the road, and everyone can see it as they walk by. Her demonstration plot is thriving, even in the drought.

“I try to bring as many people here as possible to show the difference,” she says. Until people see it for themselves, no one wants to try the improved seeds that have led to her improved harvests.

Pulseira is known as a lead farmer, training her neighbors on conservation agriculture techniques. Simple changes like crop rotation and minimal soil disturbance, as well as covering the soil with mulch and grasses, can mean the difference between 30-kilogram and 135-kilogram harvest bags. That was Pulseira’s maize harvest last year—she harvested 135 kilograms from her demonstration plot compared to only 30 kilograms from her traditional plot. For beans and soy, she harvested five times as much from her conservation agriculture plots.

Using conservation agriculture techniques was key, but so was investing in improved seeds—clearly marked along her plots with ZM521 Phoenix signs, which she shows to her neighbors.

“We want more Phoenix here,” she says, meaning the Phoenix Seeds Co. improved seeds. Like “Kleenex,” the company’s name has become synonymous with its product.

Phoenix Seeds, a local Mozambican company, began partnering with NCBA CLUSA and the USAID SEEDS project as part of the Feed the Future Partnering for Innovation program in 2014. Scaling up the private sector seed business is considered a key factor in improving yields and incomes for farmers in Mozambique.

Of the 90,000 tons of seed planted in Mozambique every year, only 10 percent is certified seed. The remaining 90 percent is simply grain retained by farmers from one year to the next, with no guarantee of yield potential or fertility. Low use of certified seeds is one of the largest factors in Mozambique’s low agricultural productivity.

That certified seed can mean the difference of 500 kilograms of harvest a hectare to over 2 tons, according to Kevin Gifford, Phoenix Seeds founder. With such obvious benefits, why haven’t farmers been using the certified seed? The problem has been access.

On average, Mozambican farmers need to travel 50 miles (80 kilometers) to the nearest seed store. Yet, when they arrive, the store has likely sold out. If available, the seed is frequently old, a low-yielding variety or uncertified, and the product is not packaged in “smallholder friendly” bag sizes appropriate for smaller farms. Farmers are unlikely to have enough funds to purchase the whole inputs “package,” which, in addition to the seed, includes fertilizers and other products needed to optimize the effects of investing in certified seed.

[Cristina Pulseira leads a conservation agriculture training in her field.]Seeing a need for high-quality seeds in Mozambique, Phoenix Seeds formed in 2002.

“Where Phoenix Seeds is quite unique is that we are primarily a farmer who has identified a real problem for other farmers and himself, and then gone into the seed business to rectify that problem,” said Gifford, who started the company in Mozambique after moving from Zimbabwe.

Simply growing certified seed did not solve the problem of getting it to the farmers. To get the seed from seedling farm to warehouse to market to smallholder and ultimately to growing on farms required addressing the logistical challenges in rural Mozambique.

“For us, what NCBA CLUSA brought to the table was something that we were already investigating, but we didn’t have the means or the full idea of how to fulfill that. And that was how do we get our extension training into the remote areas; how to get the seed sales to the farmers,” Gifford said.

The partnership developed several innovations to get quality seeds into the hands of farmers including seed fair marketing campaigns, radio programming and demonstration plots. But the key piece was training agro-dealers, local community-based entrepreneurs who could aggregate orders, market seeds in small seed stores and support themselves off income from seed sales. The best agro-dealers were farmers who not only showed entrepreneurial skills to sell product, but who were also respected by their peers as being good farmers.

“I think the strongest issue with regards to sustainability is allowing not only the farmers, but the entire input chain of supply to be self-reliant and private and self-sustaining,” Gifford said.

“Creating an environment where entrepreneurs actually make a sustainable living by supplying the inputs means that the farmers themselves, by purchasing improved inputs commercially and still making a profit, break the cycle of aid handouts,” Gifford noted.

Connecting small entrepreneurs to private firms like Phoenix is being called a win-win for both sides. Phoenix was able to better understand smallholder farmer needs and develop smallholder-friendly seed packets based on farmer feedback, and rural farmers could finally access quality product.

Another, Lidia Gaspar, is also a community midwife, exemplifying the model of working with trusted community members who offer a range of goods and services in areas where they are most needed.

“This is one of those classic pebble-in-the-water ripple effects. As you create the trust and the understanding in a very small concentrated area, suddenly the idea will radiate out and it will be exponentially accepted and adopted by much more people,” Gifford said.

Pulseira walks around her plot with the Phoenix ZM521 maize seeds, pointing out the strength of the stems. With the extra income from her farm last year, she bought concrete to finish her house. She’s confident in her farm, knowing she used certified seeds. “It was worth the investment,” she says. She already has plans to buy goats this year.
Making plans for the future seems natural for both farmer and seed company. 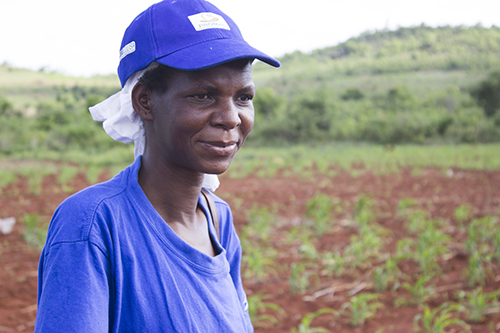