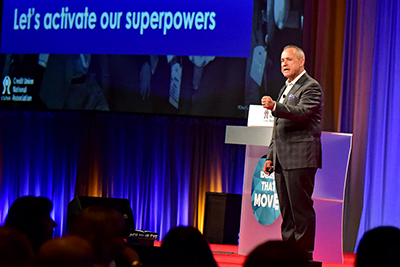 “We have in our DNA the track record and capacity to do amazing things,” Nussle said. “And our cooperative superpowers are our best asset and our competitive advantage, as well as the building blocks of our movement, founded in our seven cooperative principles.”

Nussle also described the three “existential challenges” facing credit unions, attacks on the credit union model and the market being the first two. And the third?

“I hear too often about credit unions competing with other credit unions. You’ve seen the data. We have 7 percent of the market share, with 93 percent of the market an ‘empty blue ocean’ to go after,” Nussle said. “Banks and unregulated fintech is our competition, not other credit unions. It’s natural to be ambitious and competitive, [but] we are simply not big enough to fight amongst ourselves. I know we’re fiercely independent, but I want us to be fiercely cooperative as well.”

Nussle said CUNA’s strategy to combat these threats is to raise awareness and consideration of credit unions, using the Open Your Eyes to a Credit Union® campaign to elevate the credit union brand, amplify current marketing strategies and using targeted, efficient methods to reach consumers. So far, the campaign has reached 5 million consumers.

He also made a major announcement: that three new states will launch an Open Your Eyes to a Credit Union campaign. Starting in July, campaigns will commence in North Dakota, South Dakota and Indiana. Already, the campaign is active in Minnesota, North Carolina, South Carolina and Michigan.