Returning from a recent two-week trip to Senegal in May 2016, Farmer-to-Farmer volunteer and organic vegetable and animal health specialist Sequoia Ireland shared her favorite moments, along with what she learned while training women in four villages on soil fertility, with NCBA CLUSA.

Partnered with the umbrella organization Aprofes, a local women farmers’ group in Senegal, Sequoia headed out with Farmer-to-Farmer to train women-owned producer groups and cooperatives in four villages across the Kaolack region. From the classroom to the garden, we asked her about her most memorable moments.

“This was an amazing experience for me,” Sequoia said. “Because I hadn’t had this opportunity before, this helped me understand this is definitely what I want to do now.”

Her favorite village was called Thiamene, she said. Here, the women’s group got a parcel of land on loan from a village elder, which they were ultimately able to purchase using the profits from the vegetables grown on that land. The group had had a previous volunteer come through, and at the end of training performed a skit and song incorporating both what they had learned from Sequoia and also from the previous volunteer on soil erosion and climate change.

[Sequoia demonstrates a simple soil fertility test using local market ingredients.]Other stand-out moments included playing the sister scarf game, where everyone puts their scarves into a pile, a young girl takes two out and ties them together. The two scarf owners that are tied together are tied for life as sisters, said Sequoia, who took a selfie photo with her “scarf sister,” to everyone’s delight.

Working with limited resources meant Sequoia had to get creative with her lesson planning. She brought posters and visual aids, and gave the women practical hands-on examples. Showing the women her own garden at home and telling stories of raising pigs in North Carolina helped her connect. Sequoia helped the women decide which vegetables to grow, including how to use complementary vegetables, crop rotation, inter-cropping and under-cropping. These techniques help to increase nutrients in the soil, prevent evaporation and keep pests under control.

“There’s a lot of hard work raising fruits and vegetables, and to be able to show them that I was doing it at home as well helped with the trust,” Sequoia said.

“You have to be flexible in what resources you have available to use. I wound up turning the training session into a science class,” Sequoia said. She was able to use local market ingredients like baking soda and vinegar to show the group how to perform a simple soil fertility test.

Beyond the villages and training, Sequoia got to know her hosts. She said she felt like she became part of the family at the hotel where she stayed. “I learned that you’re going to make family wherever you go in the world,” she said.

Going forward, Sequoia is considering donating seeds through the Farmer-to-Farmer program and has gotten her science teacher mother hooked on a potential future assignment. 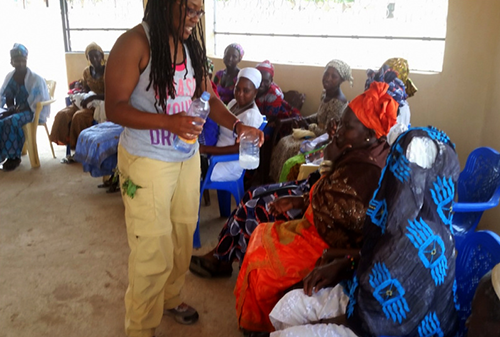