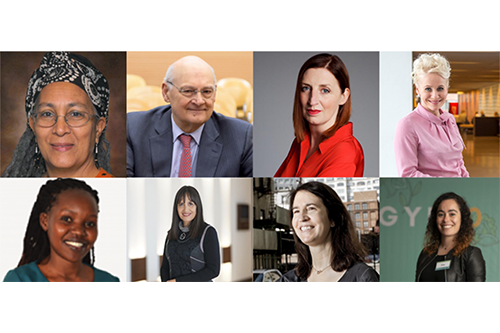 The cooperative identity—the central theme of next month’s World Cooperative Congress—was high on the agenda at the 2021 Cooperative IMPACT Conference, which gathered the U.S. co-op movement for a week of discussion in October.

The Statement on the Co-operative Identity, agreed by the ICA in 1995, outlines the 7 Cooperative Principles alongside the key values on which co-ops are based: self-help, self-responsibility, democracy, equality, equity and solidarity, as well as the ethical values of honesty, openness, social responsibility, and caring for others that cooperators believe in.

In a keynote conversation at IMPACT 2021, organized by NCBA CLUSA, co-op scholars Anu Puusa and Jessica Gordon Nembhard reflected on the increased interest in the cooperative identity, suggesting a shift in focus from the 7 Cooperative Principles toward the values on which co-ops are based.

Dr. Gordon Nembhard said that it is the cooperative values that most connect with our daily life and “our humanness.” People practice solidarity in daily life as a natural part of the human experience, she added, “but we’ve been alienated from that—and we need to reclaim it.”

Throughout the conference, speakers argued that there is significant room for improvement when it comes to using the cooperative identity to strengthen the movement. Public awareness of the co-op model is low, and many people who are aware of co-ops don’t fully understand what sets them apart from other businesses.

In a session called “Going Deeper with Cooperative Identity,” economics professor Stefano Zamagni argued that, as well as its mission, how a co-op creates value and why it creates value is one of the key things that differentiates it from an ordinary business. He said that people operating in mainstream businesses tend to act based on “extrinsic reasons,” such as profit or efficiency, whereas cooperators act based on “intrinsic reasons” such as the values of democracy and equity.

“When we face the issue of identity, we should never forget the basic motivational system of people,”  Zamagni said. “A cooperative is characterized by the fact that at least the majority of its members operate in a particular way because they are intrinsically motivated. In a capitalist firm that is not required.”

However, this distinction is not always easy to communicate to those outside the co-op world.

Speaking in the same session, Rose Marley, CEO of Co-operatives UK, described the challenge of co-ops being able to “stand out and be noisy” when there is so much ethical branding now happening in the wider corporate world. “What we’re not doing very effectively across the world is really shouting about what our USP is, and why that’s important,” Marley said.

In her session, Anu Puusa looked at how co-ops actively avoid emphasizing their uniqueness, saying, “many co-ops are emulating investor-owned businesses and thus losing their co-op identity, and this is very sad.”

Many co-op members don’t recognize their ownership status or feel any connection to the wider movement, Puusa added; to remedy this, it is crucial that co-ops apply the fifth cooperative principle and provide education and training, she said.

She also pointed of a relative lack of researchers studying cooperatives around the world, compared to the size of the co-op movement. Our collective understanding of co-ops has “crumbled,” she warned.

Monica Chepkirui, a teaching assistant at the Cooperative University of Kenya, also looked at ways to improve co-op research. In a session called “Co-op Principles in Practice for Stronger Communities,” she said there is often a lack of support for young academics interested in studying cooperatives, particularly in terms of mentoring from senior researchers and access to funds for field research and conference attendance.

Also speaking in this session was Colombia Perez, director of the Institute of Social Economy and Cooperativism (INDESCO) at the Cooperative University of Colombia.

Dr. Perez sensed a lot of skepticism around co-ops and social enterprise, and called on universities to connect with students’ day-to-day lives to overcome this. “The courses by themselves are not enough—this is why we have created spaces like festivals and trade fairs,” she added, highlighting her university’s development of Solidarity Territories, spaces where cooperative action can take place and be promoted within an ecosystem that connects with family life, culture and entrepreneurship.

Speaking from her context in the U.S., Dr. Gordon Nembhard stressed that even though public understanding of co-ops is low, there is now “an aching for this information.” She suggested that part of this interest stems from families’ and communities’ cooperative heritage, that when people hear about co-ops and mutualism, they often have a vague recollection from their family history of something similar and wished they knew more about it.

This theme of mutual heritage in the U.S. was also touched upon by Sara Horowitz, author of Mutualism: Building a New Economy from the Ground Up. In her keynote conversation with Esteban Kelly, Executive Director of the U.S. Federation of Worker Cooperatives, Horowitz encouraged audience members to look into their own family histories, asserting that they will likely find stories of mutualism in their past.

The discussion highlighted the need for cooperatives to be mobilized as institutions and “show up” in their local communities—in response to natural disasters, for example. Horowitz described this as a “sacred obligation that has come down to us from the generation of cooperators before,” adding “and we are handing this baton to the next generation that is facing things that we find unfathomable.”

A number of examples of this “baton handing” were shared during the IMPACT conference, including during a session called “Entrepreneurship: At the Core of Co-op Identity and a Means for Wealth-Building.”

This featured a contribution from Ana Aguirre, EU vice president at the International Cooperative Alliance (ICA)’s Youth Network and co-founder and lead of cooperative development at Tazebaez Co-op.

Aguirre shared the ICA Youth Network’s work to promote the co-op model among young people, including the mapping of youth led co-ops, and the Replication Project of global investment.

With social awareness currently “boiling,” she hopes co-ops will be able to become mainstream, and called for more co-op education in schools and universities to make the most of this opportunity.

“Unless people know the model and know it checks all the boxes for what they want in their businesses, they won’t choose it,” she added.

Aguirre believes that the best way to promote the cooperative model to young people is by sharing examples of successful, well managed co-ops and presenting a diverse range of leaders within the movement, so that young people from different backgrounds can imagine themselves in similar roles.

She challenged cooperators to “be big and outspoken”—not just when surrounded by others in the movement, but when representing the movement in other environments too, in order to show how aligned the cooperative identity is with the world’s shifting concerns. Aguirre summed up this call to action with the proverb, “it is better to light a candle than curse the darkness.”