Moving a small coffee seed from nursery to plantation is a delicate procedure. Moving over 350,000 coffee seeds is a large undertaking. Since January, the Las Lajas Cooperative, with technical support from NCBA CLUSA’s USDA-funded Coffee Rehabilitation Project in El Salvador, has transplanted new rust-resistant varieties using the techniques and technology that will get them through the largest coffee crisis the region has ever seen.

A team of 50 people, 45 of them women, transplanted the seeds from the nursery to over 100 hectares (almost 250 acres) of coffee farms over first three months of the year.

“We hope for the best results, since they are productive and rust-resistant varieties… we are grateful to the project because the support and technical advice that’s been provided to us has been outstanding,” said Antonio Chavez, who oversees the nurseries at the Las Lajas Cooperative.

In addition to planting the new rust-resistant coffee type, called Icatu Amarillo or Icatu Yellow, training for how the co-ops transplant seedlings is also saving them time and money. Each transplanted seedling used to cost 30 cents including transport and planting, but with innovations like automatic hole diggers and smaller bags the farmers can move more seedlings more quickly. Each seedling transplant cost is now down to 12 cents.

NCBA CLUSA first started supporting Las Lajas in the 1990s, getting them to become one of the region’s first organic growers.

“When we got here, organic and these techniques were a crazy idea. So we found some crazy people to do it,” said Carlos Padilla, NCBA CLUSA’s Training and Technology Transfer Specialist.

Coffee farmers who had worked with rust-resistant varieties came to field trainings to share about their successful harvests and high-quality cupping scores. Coffee cupping is a tasting designed to rank quality.

And other co-ops in the region have taken note. In the first quarter of 2015, at the start of the Coffee Rehabilitation project, 950 farmers from 10 cooperatives had planted seedlings on nearly 5,500 acres using the rust-resistant varieties and low-cost technologies.

And the innovations of smaller seedlings bags mean more seeds in each nursery, lowering the cost. Smaller bags, including using recycled soda bottles, which weigh about 1 pound with soil, upped their transplants rates to 1,000 per day compared to 600 per day with the traditional 3 pound bags, noted nursery manager Anotnio Chavez.

Many co-ops did not have nurseries on site. Growing their seeds from scratch, they are able to start the process with the benefits of organic market prices and provide more jobs in a region struggling to combat coffee harvest losses from rust fungus.

“This is something we can’t quantify. The ability to have a job is invaluable,” said Sigfredo Benitez, General Manager for Los Pinos Cooperative, another co-op supported by the project.

In 2013, the beginning of the coffee rust crisis in Central America, Los Pinos Co-op took the opportunity to begin a 12 year renovation plan. They were switching to rust-resistant varieties, but had never run their own nurseries and could not depend on quality seed. They had only converted 158 of their 700 acres of land. With NCBA CLUSA technical support, they built a nursery and decided to switch to organic.

“Some that sold to us said they were rust resistant, but clearly they were not. Now with our own nurseries we can guarantee our plants and varieties and this is how we can revive our strong coffee tradition,” Benitez said.

The co-op is now growing 235,000 seedlings for themselves and they started organic with them from the beginning.

“It’s been a new experience for us and filled us with hope and ambition,” said nursery manager Wilson Mejia.

Supporting co-op nurseries with rust-resistant seeds and training on the innovations and technologies to raise them cheaply and effectively has given new life to the coffee industry in El Salvador. To learn more about our USDA funded Coffee Rehabilitation Project in El Salvador, click here. 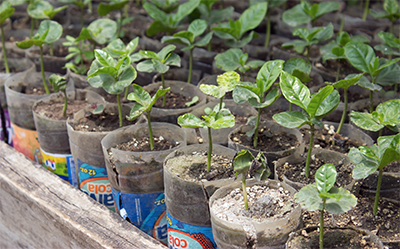 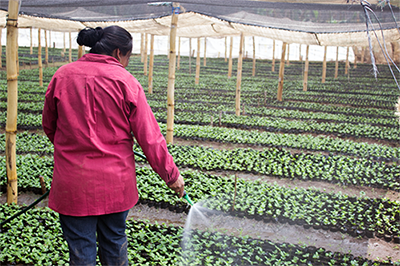