With demonstration farms setting up in technical institutes in the Dominican Republic, there is hope for a highly trained next generation of livestock farmers.

NCBA CLUSA’s SAFE Agriculture Project in Dominican Republic, in partnership with the U.S. Department of Agriculture and known locally as the PROGANA project, continues making efforts to strengthen and create more efficient Dominican livestock farming. Demonstration farms accompanied by technical assistance have been key in showcasing good farming practices and are serving as an example of productivity improvements to surrounding farmers. One of these demonstration farms is located in the San Ignacio de Loyola Technological Institute (ITESIL), a non-profit educational institution that aims to train young people in the border area and the northwest region in the agricultural field. ITESIL is located in one of the poorest areas of the Dominican Republic.

To help ITESIL establish itself as a demonstration farm, the SAFE Project co-financed a fund to train 38 technicians in the administration and management of livestock farms, as well as supporting their Food Laboratory to provide milk and dairy product analysis for producers in the northwest region of Dominican Republic. The support also includes the construction of individual calf hutches, as well as the establishment of improved pastures and living fences.

PROGANA’s support has already begun to bear fruit for ITESIL. In terms of animal health, during the first laboratory tests performed on all ITESIL cows they realized that animals they thought were healthy, were in fact ill. This enabled them to understand the importance of carrying out these analyses as preventive measures against the loss of animals and the decrease in milk production and quality. In response to some of the issues found, low-cost measures have been adopted in milking procedures to solve some of these issues, such as setting sealant on the udders after milking, drying teats with recycled paper instead of sponges, and encouraging milkers to always wash their hands. Father José Ramón López, ITESIL’s Director, encouraged farmers to see these analysis at the institute as investments for their livestock, not as expenses.

Otherr improvements from the demonstration farm has been close monitoring and recording of productive and reproductive activities for each milking animal and the increase of calf weight after a change in their management. Prior to the intervention of the SAFE projet, calves were collectively held outdoors. Under the project’s recommendations, they are now managed individually in calf hutches, allowing them to have safe food and water and not have to compete with other calves. Calves that previously took a year and a half to have the appropriate weight for sale, now take 7 or 8 months to reach that same weight, increasing income for farmers.

“This has been very useful in the management of milking animals… to know the time in which they should be dried, the times of services and the identification of changes in production,” López said.

ITESIL has also established living fences. Previously, the division of paddocks was done with common dead posts, but living fences are made of living trees and shrubs. Changing the fencing has also impacted how the cows eat. Formerly, they all gathered under a single tree in search of shade and rest. Now, the cows can keep looking for the shade under the living fences, but they can continue to feed on their leaves and keep moving, which promotes better animal nutrition.

The ITESIL demonstration farm is an example of how small changes in the administration of farms can have a great impact on animal nutrition, health and welfare and thus increase productivity in Dominican livestock farming. This is especially important for the northwest region of the Dominican Republic where ITESIL operates, which although considered a dairy production region, faces drought problems that require more locally unique ways to conduct profitable and sustainable livestock farming.

The SAFE Project aims to support the development of livestock value chain equivalency through: capacity building, strengthening of national networks and improving organizational, administrative and financial management of livestock businesses and associations. Learn more about the USDA SAFE Project. 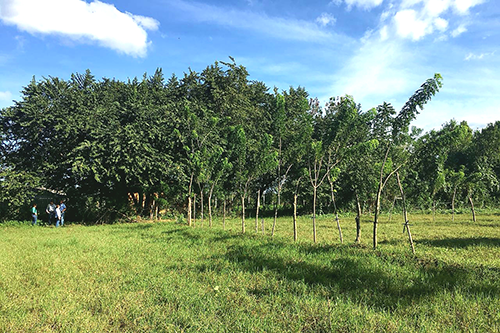