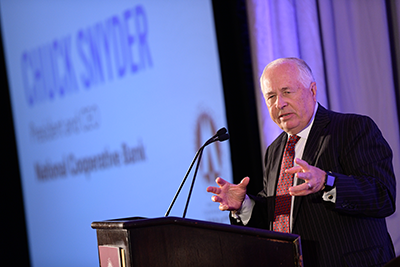 The entire team of Everything Co-op wishes to express our deepest sorrow at the passing of Charles “Chuck” Snyder, President/CEO of National Cooperative Bank (NCB). Chuck was a servant leader, who made his transition on November 6. Our team is humbled to have been a part of his journey and is pleased to be able to create an opportunity for our previous guests to share their personal experiences of how Chuck impacted their lives or their organizations. Since we cannot possibly know all the people who were most closely associated with Chuck, we have chosen to pay tribute to him through the lens of Everything Co-op.

Tune in to WOL 1450 AM, 95.9 FM and WOL Live Stream, Thursday, November 18, 10:30 am EDT, for Everything Co-op, hosted by Vernon Oakes. This week Vernon will be joined by staff from National Cooperative Bank (NCB), National Cooperative Business Association CLUSA International (NCBA CLUSA), Cabot Creamery, 1Worker1Vote, and a host of personal friends and colleagues, to pay tribute to Chuck. During the show we will also read tributes that were sent via our website, as time permits.

Chuck joined the National Cooperative Bank (NCB) in 1983, before being named as President and CEO in 1992. Throughout his professional career he remained an ardent supporter of cooperatives, and he is deeply loved and respected by the entire cooperative community.

Chuck was inducted into the Cooperative Hall of Fame in 2012 and received the Jerry Voorhis Award from the National Association of Housing Cooperatives for his long-standing commitment to affordable housing cooperatives. In 2017, he was the recipient of the Esther Peterson Consumer Service Award presented by the Consumer Federation of America for his commitment to consumer rights.

NCB has sponsored Everything Co-op since its inception more than eight years ago, and Chuck was instrumental in garnering that support. We have truly appreciated the support and guidance provided from NCB, and the Advisory Team he coordinated. As such, we would like to pay tribute to Chuck, and want to enlist your voices to express our communal love for him.

We invite you to send your remembrances of Chuck to us by posting it to the Submit a Show Idea section on the Everything Co-op Contact Us page. We will post the submissions on our website.

Listen to Chuck’s last interview on Everything Co-op with Doug O’Brien here.