Farmers in Mozambique have very limited access to training. Each farmer trainer, known as an extension worker, is serving around 1,200 farmers on average. Although this ratio has improved in recent years through various initiatives to improve agricultural production, continued technological, human and financial limitations mean it has yet to reach the Food and Agriculture Organization (FAO)’s recommendation of not more than 250 farmers per extension worker.

This lack of technical assistance for smallholder farmers has negatively influenced their adoption of good agricultural practices and, as such, contributes to low agricultural production in the country in comparison with neighboring countries. For instance, in cereal crops, Mozambique productivity is in average 0.8ton/ha, whereas Malawi is 3.0 ton/ha, South Africa is 3.8 and Zambia is 1.9 ton/ha.

NCBA CLUSA’s Extensão Multimédia project, funded by USAID, UKaid, IFAD and the Bill and Melinda Gates Foundation, is in direct response to this situation. Extensão Multimédia is a three year project running through February 2019 that aims to use Information Communication Technology (ICT) to disseminate agricultural training messages about best practices, pest/disease management, agricultural inputs, market information and other information required for smallholder farmers to better produce and market their produce.

To do this, the project partnered with Human Network International (HNI) to disseminate extension messages through text messaging and voice recorded messages via a platform hosted by the mobile phone operator Vodacom and complimented by a webpage dedicated to providing technical support and teaching materials, manuals and videos to rural extension staff.

Similarly, its partnership with Farm Radio International (FRI) enables the project to support local community radio stations to transmit radio programs with an agricultural content, targeted at smallholder farmers and transmitted in both Portuguese and local languages. The project also counts on the support of a range of public and private partners in the agricultural industry in Mozambique, notably the Ministry of Agriculture and Food Security (MASA), the Alliance for a Green Revolution in Africa (AGRA)’s Scaling Seed Technology Partnership (SSTP) project and various private sector firms that utilize the platform for marketing of their products/service and for the procurement of smallholders’ offtake.

Co-op Weekly
Keep up with news, events and features from NCBA CLUSA

This year the Extensão Multimédia has enabled the Alto Molocue district radio to broadcast its first ever agricultural extension programs through a series named “Farmers’ Hour” to the 75,000 population living within its 75km radius. Together, NCBA CLUSA and FRI have supported the radio through training for its staff and by providing the necessary resources (desktop computer, voice recorder, etc.) to produce and air agricultural programs that are in line with FRI’s high standards and successfully engage smallholders as active listeners who then go on to practice what they have heard. “Farmers’ Hour” discusses topics related to best production practices for cassava—from land preparation right through to post harvest practices and marketing—and is aired three times a week in Portuguese and in the local language Lomué. Between May and August 2017, Alto Molocue radio aired 13 episodes of “Farmers’ Hour,” packaged as a series to ensure listeners’ maximum interest and engagement.

To encourage and make it easier for listeners to engage in the “Farmers’ Hour” radio programs, the project also supports listeners to organize themselves into listening groups that meet for every broadcast.

“We are listening to the radio station, but they are also listening to us,” said Victorina Vasco, pictured here with members of her listening group.One such group is Soares Listening Group, located 30 km from Alto Molocue. Soares Listening Group is composed of 30 members (half of whom are women) who meet every Thursday at 12:30 p.m. to listen to the programs and engage in discussion over their content. They are able to relay their comments, questions and concerns back to Alto Molocue radio station by way of the Uliza platform, which enables them to call a cellphone number and leave a recorded message for the radio team to respond to during the next edition of “Farmers’ Hour.” Uliza enables Alto Molocue radio to receive, save and respond to calls from all of its listening groups as well as members of the public in general, thus enabling them to answer questions, clarify issues and modify the program’s content in response to listeners’ needs. This is what makes Extensão Mulitmédia’s radio programs so participatory: farmers not only listen, but are active contributors to its content and evolution.

“I’ve lived in this community for many years and this is the first time that we’ve ever had a radio programs like this” said Victorina Vasco, 42, a smallholder farmer and member of Soares Listening Group. “’Farmers’ Hour’ has really helped farmers here. Before, we just planted cassava sticks without following any real guidelines. Now, we know that there is a correct time and method to do this,” Victorina said.

“Farmers’ Hour” is helping change the way smallholder farmers are producing cassava in a way that generates better yields. Surveys in the community have shown that at least 84 percent of the population has listened to at least one episode. Spurred on by this success, the Extensão Multimedia project intends to expand its activities to other provinces and districts in Mozambique to give other radio stations the opportunity to start producing interactive programs with an agricultural content, enabling listeners to inform themselves on best practices, improve their yields and take more active, positive decisions regarding their agricultural production. 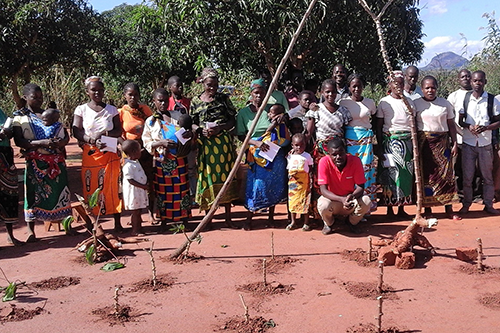