Cooking on live TV with late night hosts sounds like the stuff of celebrities, but in Senegal it was nutrition experts and representatives from the U.S. and Senegalese governments who partnered to launch a new cookbook for mothers.

The new cookbook, which features nutritious recipes based on local foods, was developed through the USAID-funded Yaajeende project, which NCBA CLUSA is implementing in Senegal. The recipes are a compilation of favorites from mother groups (known as Debbo Galle or “good mother” groups) living in the project’s four implementation regions. Through the Debbo Galle curriculum, mothers learned about the importance of exclusive breastfeeding and when to introduce and supplement with other foods. Broken down into recipes for each stage from infancy through age 5 (the most vulnerable years of a child’s life for nutrition and health issues) as well as meals for the whole family, this recipe book brings all the nutrition, sanitation, food preparation questions together—with some delicious results!

Four panelists from USAID, Senegalese research institutes, government ministries and nutrition experts launched the cookbook live on a local variety show “Li Ci Penc Mi.” During an hour long panel on the impact of nutrition in Senegal and how the Yaajeende project—one of the flagship programs under the Feed the Future initiative—has truly impacted the nutrition of a young generation of Senegalese children, example local ingredients from the cookbook were showcased. Yaajeende has been important in showing how nutrition programming can be effective. For children in the Yaajeende project zones, stunting has decreased by over one quarter.

Following the various stages of growth, recipes for porridges, enriched flour and other local foods are coupled with hygiene and food preparation standards. Decreasing stunting and malnutrition in Senegal is about more than access to nutritious options; families must also want to eat these foods. Every week, many Debbo Galle groups host a community meal featuring recipes with nutritious ingredients and preparing enriched flour and porridge for kids throughout the village.

A child eats nutrient-dense porridge at a community meal, one of the Yaajeende interventions that have helped cut childhood stunting by a third.In villages like Sylla Diongo, the community collects extra sorghum, millet and maize to make enriched flour for all the children and their mothers to have access through the health center when the Plumpy’Nut (a peanut-based nutrition supplement used to bring children up to weight) runs out, which is common in the rural village.

Others, like Hapsatou Kah, who leads the Debbo Galle group in her town is also a Community Based Solution Provider (CBSP), who makes extra enriched flour along with other nutritious snacks like dried fruit chips for sale. With her other business providing access to improved seeds, sales like these have topped her revenues at over 50 million fCFA last year.

And access to these ingredients mean mothers can experiment with new nutritious recipes their children will want to eat, like those featured in the Yaajeende Recipe book. And through public campaigns like “Mangez Orange” to encourage eating foods rich in Vitamin A or “Celludam” to drink clean water, the families meeting a minimum acceptable diet in these areas has tripled.

In partnership with local Citizen Working Groups and through associations like the Debbo Galle women’s groups, over 9,500 women have learned how to make enriched flour for infants. With the cookbook, even more women across Senegal have access to this training. 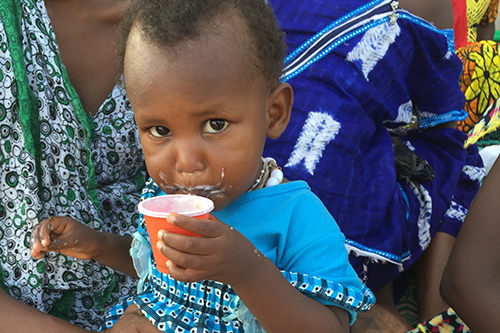