Members of the Gamba village Mother-to-Mother group, in Niger’s Zinder region, were wondering how to get a village health center, because the closest one was five kilometers away—too far to walk with sick children. The village had been requesting a local health center for decades.

Some of their husbands were members of the village Husbands’ School, a peer education group for fathers. They were also discussing the need for their wives and children to visit health facilities and clearly identified the lack of a village health center as a major obstacle. In December 2016, the village created a community-based health and nutrition quality improvement (QI) team, supported by the USAID-funded REGIS-ER project, implemented by NCBA CLUSA in Niger and Burkina Faso.

The QI team first focused its efforts on promoting enriched porridge consumption by all children between six and nine months old. They organized regular group sessions on making the enriched flour and porridge with the village Mother-to-Mother groups, and they performed home visits to ensure the adoption of the practice. They also promoted home garden visits by the Local Development Committee, or Comité Local de Développement (CLD).

The CLD also initiated a lobbying effort to establish the health center, targeting the office of the prefect of Magaria Department. The CLD successfully leveraged funds from three of the community’s savings and loan groups, and one community member offered the plot of land for the health center.

The CLD collected nearly 1,400,000 CFA francs ($2,600) from the community to contribute to building and equipping the health center. The money collected within the community helped purchase building materials, a professional mason to finish the building and install a latrine, furniture and equipment, and a startup stock of pharmaceuticals.

With the facility completed, the mayor’s office recruited a health agent for the center. During the official opening, the Magaria Department health district rewarded this initiative by offering a maternal delivery bed and a desk for the health agent. The health center has been functional since February 2018.

A health worker stands outside the Gamba’s new health center. “Before, to visit the nearest health center, we had to spend 10,000 CFA francs ($20), and we lost a lot of time. Now, it takes less than 1,250 CFA francs for a visit, as we have the center just next to us. We feel relieved, especially pregnant women who can get prenatal care and professional support to give birth,” said Gamba resident Kanta Ibrahim.

“Before, we had to go several times to the administrative center over 5 kilometers away so our children could get their immunizations. It was long and exhausting. My son is less than one month old today—look how healthy he looks,” Kanta said.

The new health center also benefits neighboring villages, which were even further away from a health center. Achi Moutari comes from Maiboukrou, five kilometers away, to have her children vaccinated. “We are impressed by what Gamba achieved. It is a unique example in our area. Thanks to the health center and the efforts of Gamba, we cut the journey in half. Such a major change!”

The Gamba CLD continues to organize development initiatives with the trust of the community. It has now taken over the management of the other activities in the community, including an animal transfer activity supported by REGIS-ER. The CLD also created a fund of 150,000 CFA francs ($300) to contribute to drilling a brand-new borehole in their village. 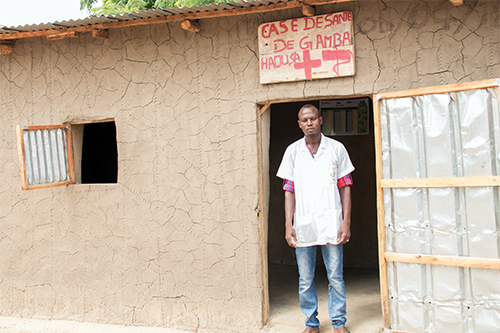