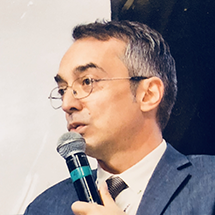 Director
Cooperatives of the Americas

Born in Italy, Daniel Salerno has an extensive professional record within the cooperative movement, both at the domestic and international level. He is currently Director of Cooperatives of the Americas, a region of the International Cooperative Alliance. Before his current role, Daniel was serving as Director of Coopermondo, an NGO created by Confcooperative, the largest apex organization of the Italian cooperative movement. Confcooperative as implemented over 100 international cooperation projects in more than 40 countries around the world, directly or through the network of cooperatives integrated in the confederation.

Daniel has a bachelor’s degree in Political Science from the University of Bologna, with a thesis on the emergence of the Chilean cooperative movement. He also has a master’s degree in Nonprofit Organizations and European Project Management (ASVI, Rome) as well as a master’s in European and International Relations (La Sapienza University, Rome). Additionally, he has a diploma in Latin American Studies from the Italian-Latin American Institute, Rome.