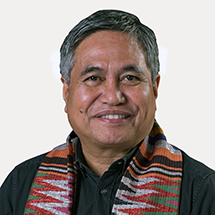 Dr. Jaime Aristotle Alip is the Founder of the Center for Agriculture and Rural Development-Mutually Reinforcing Institutions (CARD MRI), the 2008 Ramon Magsaysay Awardee for Public Service. Dr. Alip is now the Chairman Emeritus of CARD NGO and continues to chair the board of the major institutions of CARD MRI (CARD Bank, CARD SME Bank, and CMDI). Established in 1986, CARD MRI is now a group of 23 mutually reinforcing institutions whose major focus is poverty eradication in the country. As of June 2020, CARD MRI has impacted more than 6.8 million poor families with a total outstanding loan of more than Php 27 Billion pesos. Its microinsurance arm, CARD MBA/CPMI, insures more than 29 million individuals.

Dr. Alip served in various key positions in the Philippine Government: Undersecretary of the Department of Social Welfare and Development (2002-2003); Assistant Secretary of the Department of Agrarian Reform (1996-1998); and Deputy Executive Director of the Agricultural Credit Policy Council (1988-1992). As Assistant Secretary of the Department of Agrarian Reform, he was given the Secretary’s Award in 1998 for his contribution to the agrarian reform program. Ernst and Young recognized him as the Social Entrepreneur of the Year 2006; Most Outstanding Alumnus of the University of the Philippines Alumni Association in 2007, and the President of the Socialist Republic of Vietnam recognized Dr. Alip’s more than two decades of work in Vietnam in the field of poverty eradication with the Order of Friendship Award. In November 2018, he received the Elevating Homegrown Innovation Award given by OCEAN 18. He also received the prestigious Ramon V. Del Rosario Award for Nation Building in July 2019.

As an educator, he now serves as the dean of CMDI Tagum campus. He is also an Eminent Fellow of the Development Academy of the Philippines (since 2012), and an Adjunct Professor of CPAF, University of the Philippines in Los Baños (2011-2019). He served on the board of Southeast Asia Interdisciplinary Development Institute (SAIDI), Philippines from 2008-2014. He served as an adjunct faculty of the Southern New Hampshire University in the U.S. from 2008-2010. He was also a Special Fellow of Nihon Fukushi University, Nagoya, Japan. He was recently appointed as a visiting scholar/fellow of University of New Hampshire between April 2017 to 2018.

Dr. Alip is an alumnus of Harvard Business School, having completed the three-year Owner/President Management (OPM) Program in 2007 and was given the Excellence Award on Strategy. He obtained his doctorate degree in Organization Development from the Southeast Asia Interdisciplinary Development Institute (SAIDI) in Manila, Philippines in 2002. He received his bachelor’s and master’s degrees in Agricultural Economics/Marketing from the University of the Philippines at Los Baños in 1978 and 1983, respectively. He also attended the Executive Program in Global Management at the Weatherhead School of Management, Case Western Reserve University, Cleveland, Ohio in 1999.