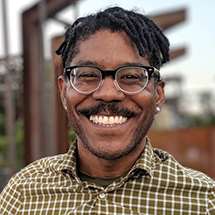 Esteban Kelly is the Executive Director of the U.S. Federation of Worker Cooperatives and has offered visionary leadership and creative strategy in economic democracy and co-op movements for over twenty years. He is a co-founder and worker-owner of AORTA (Anti-Oppression Resource & Training Alliance), a worker co-op that builds capacity for social justice movements and projects through intersectional training, consulting and facilitation.

He has served on numerous boards including the Democracy At Work Institute, the U.S. Solidarity Economy Network, the National Cooperative Business Association CLUSA International (NCBA CLUSA), the LCA land trust, and CICOPA (the international federation of worker cooperatives). Esteban previously worked at the New Economy Coalition and is an advisor to the Movement for Black Lives policy table; Beautiful Trouble, a global network of artist-activist trainers; and the Institute for the Cooperative Digital Economy.

Esteban is a recent recipient of a Philadelphia Social Innovation Award for Public Policy and in 2018 he was honored for his legislative activism by the California State Assembly and also by U.S. Sen. Kirsten Gillibrand. Esteban recently co-chaired the Philadelphia Food Policy Advisory Council as a mayoral appointee after co-founding both its Zero-Waste and its Workforce and Economic Development subcommittees.