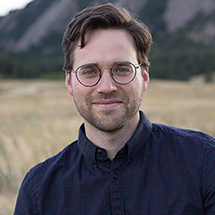 Nathan Schneider is an Assistant Professor of Media Studies at the University of Colorado-Boulder, where he leads the Media Enterprise Design Lab. He is the author of Everything for Everyone: The Radical Tradition that Is Shaping the Next Economy, published by Nation Books, and two previous books, God in Proof: The Story of a Search from the Ancients to the Internet and Thank You, Anarchy: Notes from the Occupy Apocalypse, both published by University of California Press.

His articles have appeared in publications including Harper’s, The Nation, The New Republic, The Chronicle of Higher Education, The New York Times, The New Yorker, and others, along with regular columns for America, a national Catholic weekly. He has lectured at universities including Columbia, Fordham, Harvard, MIT, NYU, the University of Bologna, and Yale.

In 2015, he co-organized “Platform Cooperativism,” a pioneering conference on democratic online platforms at The New School, and co-edited the subsequent book, Ours to Hack and to Own: The Rise of Platform Cooperativism, a New Vision for the Future of Work and a Fairer Internet. Follow his work on social media at @ntnsndr or at his website, nathanschneider.info.