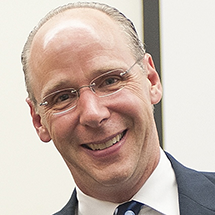 Prior to founding ROC USA in 2008 to scale resident ownership, Paul served as vice president of the New Hampshire Community Loan Fund and led the ROC line of business, including co-op technical assistance and financing, single-family lending and new development.

Paul earned his bachelor’s degree in Economics from the University of New Hampshire and graduated from Achieving Excellence in Community Development, an executive education program of NeighborWorks® America and the Harvard Kennedy School.

He has earned numerous awards, including:

In 2019, Paul was elected by NCBA CLUSA members to serve on the association’s Board of Directors. He also serves on the Development and Preservation Committee of the National Association of Housing Cooperatives.

Paul lives in Concord, New Hampshire with Martha, his wife, and two daughters. In addition to family and work, his passion runs deep for basketball, mountain biking, tele-mark skiing and his vegetable garden.