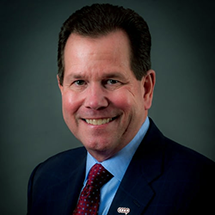 Paul Hazen became Executive Director of the Overseas Cooperative Development Council in February 2012. Previously, he represented one of the member organizations and served as OCDC’s board chair and as a board member. One of his most-recent initiatives with OCDC is the formation of its Research Group, whose mission is to research, formulate and share effective strategies for the development, performance and growth of cooperatives in developing countries.

Prior to joining OCDC, Hazen was CEO of the Washington, DD-based National Cooperative Business Association CLUSA International. Under Hazen’s leadership, NCBA CLUSA’s cooperative development portfolio grew from $8 million to over $30 million annually. During his 25-year tenure with the organization, he held key positions, including chief operating officer, vice president of public policy, vice president of member services and director of consumer cooperatives.

In demand for his cooperative expertise, Hazen speaks frequently at national and international forums on the role of cooperatives in community and economic development. He is a past recipient of the CEO Communicator of the Year award from the Cooperative Communicators Association.