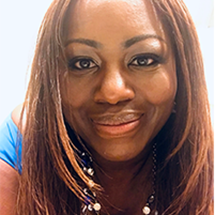 Tamela Blalock is Vice President of Cooperative Relations at the National Cooperative Business Association CLUSA International (NCBA CLUSA), where she enhances engagement and impact with the trade association among the collective cooperative leadership community. NCBA CLUSA is the primary voice for cooperatives in the U.S. that use the cooperative business model to empower people in their businesses and communities.

During the past 20 years, Tamela has worked for several Washington-area institutions including the Central Intelligence Agency, Washington Football Team, Washington Post and George Washington University. Prior to joining NCBA CLUSA, Tamela most recently served as the Executive Director of Academy of Pelvic Health Physical Therapy (during their name change from the Section on Women’s Health of the American Physical Therapy Association); and she very fondly served as the Senior Director of Membership Services for the National Association of Wholesalers-Distributors (NAW). She is also a very active member of the American Society of Association Executives (ASAE) and the Professional Convention Management Association (PCMA). Tamela has served on the PCMA Global Board of Directors, and is an alumnus of the ASAE 2016-2018 class of DELP (Diversity Executive Leadership Program) Scholars. She is also one of the co-founders of the Association for Women in Events (AWE).

Tamela has a bachelor’s degree in Marketing from Georgetown University and a master’s degree in Business in Tourism Administration from The George Washington University. Originally from the best state (according to Tamela) of Ohio, she grew up abroad as a military child and resides in Alexandria, Virginia where she dabbles as a home chef. A fun cooperative fact about Tamela is that she has exclusively banked at credit unions her entire life, a practice initiated by her parents.