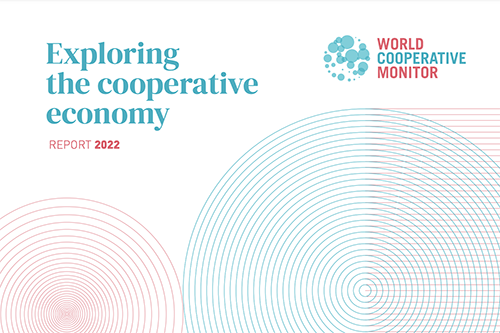 The annual global research report on cooperatives produced by the International Cooperative Alliance (ICA) with the scientific support of the European Research Institute on Cooperative and Social Enterprises (Euricse) is now available.

This year’s report is the 11th edition and marks the second decade of the project. It provides a list of the worlds’ largest 300 cooperatives and mutuals, or groups of cooperatives and mutuals, and an analysis of their economic sectors. Each year the World Cooperative Monitor produces a robust database that shows not only the economic importance of the cooperative business model, but also the global impact cooperatives and mutuals have on their members and communities. This is accomplished by building on years of research and data collection, and continually refining and improving the methodology to produce the annual report.

The in-depth research and collaboration to produce this report continues to provide the cooperative movement with a significant tool to evaluate its own positioning and highlights the importance of cooperation to the public and policymakers around the world.

This year’s report features a chapter focused on the challenges cooperatives are facing in the evolving world of digitalization. The last two editions of the World Cooperative Monitor revealed the impact of COVID-19 on the cooperative community. The team sought to investigate how the pandemic prompted the use of digital tools, particularly as it pertains to member engagement and the cooperative identity. The results, found in a dedicated chapter in this year’s report, discusses how much these tools were used, and the pros and cons of moving toward increased digitalization.

The Top 300 cooperatives and mutuals in the world report a total turnover of more than $2 trillion USD (2,171 billion USD), based on 2020 financial data. These organizations operate in various economic sectors, with Insurance (101 enterprises) and Agriculture (100 enterprises) leading the list. Wholesale and Retail Trade represent the third biggest economic sector (59 enterprises) in the ranking.

In the Top 300 ranking based on turnover, on the podium are two financial and one commercial enterprise. As was the case last year, the first two positions belong to the French Groupe Crédit Agricole ($88.97 billion USD turnover in 2020) and the German co-op REWE Group ($77.93 billion USD turnover in 2020). Rising to third place is the Cooperative Financial Network Germany – BVR ($58.02 billion USD turnover in 2020). Most of the Top 300 enterprises are from the most industrialized countries such as the USA (71 enterprises), France (42 enterprises), Germany (31 enterprises) and Japan (22 enterprises). In the Top 300 ranking based on the ratio of turnover over gross domestic product (GDP) per capita as they did last year, two Indian producer cooperatives reach the first and second positions: The Indian Farmers Fertiliser Cooperative (IFFCO) and Gujarat Cooperative Milk Marketing Federation Limited. In third place is the French Groupe Crédit Agricole.

Leading the sector rankings based on turnover are:

U.S.-based cooperatives in this year’s ranking include:

The World Cooperative Monitor is a project designed to collect robust economic, organizational and social data about cooperatives worldwide. It is the only report of its kind collecting annual quantitative data on the global cooperative movement.