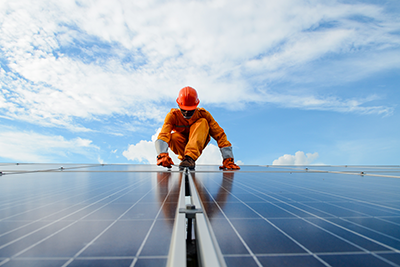 The conversation was moderated by NCBA CLUSA president and CEO Doug O’Brien who opened the discussion with a brief history of the role cooperatives have played in rural America, including expanding market access for farmer cooperatives and after the enactment of the Rural Electrification Act, banding together to form consumer-owned electric cooperatives. Electric cooperatives increased access to affordable, reliable electricity from ten percent to over 90 percent of rural households in less than a generation. Today, electric co-ops continue to serve approximately 42 million member-owners across over 50 percent of the landmass of the United States.

John-Michael Cross’s role at EESI is to help develop accessible, inclusive on-bill financing programs for electric co-ops and other entities like municipalities, with the goal of these programs being to reduce energy burdens for households and businesses. Energy burden describes, as a percentage of income, how much a household pays for energy use. According to ACEEE, the average energy burden is approximately three percent. For rural homes, that burden is 4.5 percent—a 50 percent increase in comparison to their urban counterparts.  For rural, low-income households, energy burdens average a daunting nine percent.

EESI’s work seeks to expand accessibility of energy efficiency programs through on-bill financing programs. According to Cross, on-bill financing programs are not inherently inclusive; however, he continued to say that electric co-ops have been at the forefront of building better design programs to ensure inclusivity. These programs necessitate households and utilities working together to keep rates low. On-bill programs typically do not have any upfront costs to participants, which removes any ‘pay to play’ barriers for consumers. This is especially critical for comprehensive household energy efficiency improvements. Importantly, ability to repay project loans, cooperatives most commonly use a consumer’s history of bill payments, rather than other measures typically used like credit score or income data. This expands accessibility to the benefits of the program without raising default rates. In fact, on-bill programs have a default rate that is around one percent or less.

Cross introduced the USDA’s Rural Energy Savings Program, which helps electric co-ops and other entities overcome the barrier of access to affordable capital that ensures they can pass savings on to their member-owners. He made several key points about the program. First, the program has seen extensive growth in the last year, both in approved applications and in interest from prospective applicants. This has happened with nearly no marketing or outreach from USDA. Cross recommended increasing education on the program and marketing to eligible borrowers. In addition, to keep up with demand from applicants, Cross highlighted the need to increase federal appropriations. The program, which last year was authorized at just $11 million, uses these funds to leverage tens of millions in loans.  He also noted that the need for broadband access is hand-in-hand with programs like RESP—for which limited activities are eligible—to ensure that households can capture the technological benefits of energy efficiency tools that use broadband to communicate both with the household and the utility.

Cross concluded that the benefit of on-bill financing programs and depending upon the electric co-op as the administrator is that traditional financial lenders don’t necessarily understand the value of household loans to make energy efficiency improvements, but utilities do and they’re able to manage the risk while bringing more energy and economic benefits direct to households.

Last week, NCBA CLUSA, EESI, and NRECA led a coalition of organizations in a letter urging Congress to increase RESP funding to $25 million in Fiscal Year 2022. Read the letter here

Next, O’Brien introduced Bob Coates who leads the Rural Energy Savings Program administration at USDA. The Rural Utilities Service, where RESP is housed, has a loan portfolio of over $245 billion and RESP is just one of the re-lending programs that RUS offers. These loans are offered at zero percent interest to the co-op for a term not exceeding 20 years. The co-op then re-lends those dollars to households for energy efficiency improvements and the households repay the loan through their monthly bill at rates that cannot exceed five percent and a term of ten years.

RESP loans vary widely in activity and in size – from about $150,000 to $50 million. The average loan is $6.3 million.  The only limit to this program, Coates said, is the federal appropriations. The program has grown significantly in recent years. In 2017, RUS obligated $24 million in loans. In 2020, that number grew to $104 million, and Coates expects that number to increase for FY21.

Coates noted that much of the marketing of this program by electric co-ops is actually done when consumers reach out to the co-op with concerns about high monthly bills. The activities for this program are diverse, including things like vehicle chargers, smart devices, insulation, cost effective energy storage and in some cases can even include full replacement of a manufactured home.

Coates shared several examples of successes across the country, including in North and South Carolina, Ohio, Arkansas, and Oregon. Some of those examples are captured in this short video created by the American Council for an Energy Efficient Economy and EESI.

The PowerPoint presentation is available here for more information.

The final speaker for the conversation was NRECA’s Adaora Ifebigh. Ifebigh’s job includes working with cooperatives to expand clean energy program opportunities in rural America and spoke specifically to the Achieving Cooperative Community Equitable Solar Sources (ACCESS) project, with support from the Department of Energy. This program researches how to make solar deployment affordable in communities with fewer financial resources and how innovative, cost-effective measures can serve members most in need. The key component, Ifebigh said, is to extend beyond current initiatives and look at new financial models and program designs to reduce energy burdens and ensure that benefits reach members and communities most at risk of being left behind.

Ifebigh noted the important role of co-ops in addressing income inequality – a challenge that has been steadily worsening and on clear display in the last year throughout the COVID-19 pandemic. Electric cooperatives provide service to 92 percent of persistent poverty counties in the United States. A county is deemed persistent poverty when 20 percent or more of its population has lived below the poverty line over the past 30 years.

ACCESS is currently working with six electric cooperatives across the country that are implementing programs to increase solar deployment among low-income consumers. NRECA’s role helps to programs to identify financing and program design that will help to increase participation. Some of the program designs throughout this project include integration of new technologies, special rates programs, behind the meter services, and hybridization of solar and energy efficiency programs to bundle offerings. For financial mechanisms, this includes expanding beyond traditional lenders to include Community Development Financial Institutions, Opportunity Zone incentives, or seeking catalytic funding from philanthropies.

You can sign up to stay informed on these updates from NRECA here.

Ifebigh was also joined by NRECA colleague Billie Kaumaya, Legislative Affairs Director at the organization. Kaumaya highlighted the opportunity in the upcoming investments in infrastructure to center cooperatives and meet the demand in increasing activities around electrification and renewable options. In order to reach underserved communities, Kaumaya explained, the first step is weatherization—then comes energy efficiency and renewable energies. These steps can lead to saving energy and reducing emissions.

Watch the recording of the webinar here.