When you start a business, one of the first things to do is decide how the company will be legally structured. A business’ structure determines who is liable for the company’s debt and its actions. One of the simplest business structures is a sole proprietorship, which is usually a company run by a single person or by a married couple. Sole proprietors have full liability for their company’s debts, meaning that a person could lose their personal assets if the company has difficulty.

Other business structures, from limited liability partnerships to cooperatives, offer owners some protection if the company has difficulty. Aside from liability protection, there are a few other reasons to choose one business structure over another. Learn more about the difference between co-ops and corporations and how cooperatives are a different kind of corporation that may be the better option for your company.

What Is a Corporation?

A corporation is a legal entity owned by a group of people or shareholders. How much control a shareholder has in a corporation depends on how many shares of the company they own. These types of corporations are completely separate from their owners. When a business is a corporation, it can enter into its own contracts, take on its own debts and pay its own taxes.

A company that decides to be an S-corp needs to be entirely based in the U.S. and can’t have any non-resident shareholders. Additionally, the shareholders need to be either trusts, estates or individuals.

The other considerable difference between a C-corp and an S-corp is how the company pays its taxes. C-corps are separate tax-paying entities in the eyes of the IRS, meaning they pay at the corporate rate. S-corps are “pass-through” entities, which means that their income or losses are passed through to their owners/shareholders, who then pay tax at individual tax rates.

What Is a Cooperative?

To become a member of a cooperative, a person makes a financial contribution. Since the focus of co-ops is on building and maintaining community, most exist to meet the specific needs of their members. The opinions and votes of each member in a co-op are treated equally.

In the U.S., there are an estimated 65,000 co-ops, and one-third of people are members of at least one cooperative.

In What Sectors Can Cooperatives be Found?

You’re likely to find the co-op model in a variety of economic sectors, including:

What Are the Seven Cooperative Principles?

Along with being owned by members, another thing that sets cooperatives apart from other types of corporations is that co-ops ascribe to a set of seven internationally recognized principles. The International Co-operative Alliance outlined the seven co-op principles in 1995.

Similarities Between Cooperatives and Other Types of Corporations

Although corporations offer limited liability to their owners/members, it’s important to note that those who invest in them aren’t wholly separate from the company. They are still responsible for the amount they have contributed to the entity. If a person contributes $500 to become a member of a cooperative, then the $500 membership fee is the total amount they are liable for.

Another way that cooperatives are similar to other types of corporations is that both can continue to exist even after the original shareholders have retired, stopped being members, sold their shares or died. The shares of either a cooperative or corporation are transferable, meaning they can change hands throughout the life of the company. 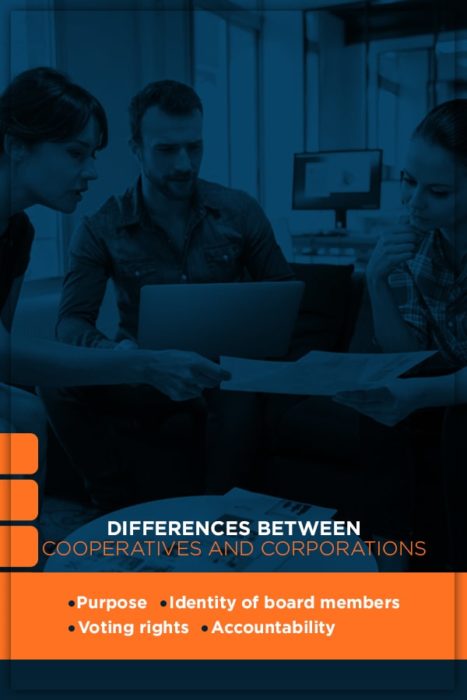 Differences Between Cooperatives and Other Types of Corporations

Distinguishing features of a cooperative include:

One other notable difference between cooperatives and other types of corporations is how they are taxed. Although there are many similarities in how the organizations are taxed, co-ops have a way of reducing their tax burden that isn’t available to other corporations. A co-op can issue a “patron dividend” to its members, and it can deduct the total amount of those dividends from its gross income from the year.

Whether you are starting a new company or are interested in changing the structure of an existing business, there is much to learn about the cooperative structure. The mission of NCBA CLUSA is to develop, protect and advance cooperative enterprise. We advocate for cooperatives businesses in the U.S. and around the world. Our goal is to build a more inclusive economy, which allows people to contribute to their own well-being to the shared prosperity of their community. Browse our site to learn more about cooperatives and the work we do.

We also invite you to become a member of NCBA CLUSA, at the individual, cooperative or associate level. If you have any questions about co-ops or about the work we do, contact us to learn more.

The Role of Energy Cooperatives in Advancing Clean Energy

Advantages of the Cooperative Business Model