Interspersed between stalks of maize, small plants look like weeds in Abelina dos Santos’ field. But while she plants the maize to feed her family, the real profits are in those low-laying plants, the soil hiding the real investment—cassava tubers.

Cassava tubers grow underground on Abelina dos Santos’ farm in Los Palos, on the eastern part of the island off the northern coast of Australia known as East Timor. After she digs the cassava up for harvest, like a potato, she sells it to the local co-op Cooperativa Café Timor (CCT), who then dries and mills the cassava into flour in the capital city Dili. The flour is packaged and resold around the country, a substitute for the expensive imported wheat flour. Back in Abelina’s village, she walks over to her women’s group, who buys the cassava flour and uses it to bake cookies. The profits from the cookie sales go to fund their community activities.

[CCT processes cassava bought from farmers like Abelina into flour, which is a substitute for imported wheat flour.]This cycle, from farm to co-op to market, is part of how CCT is making an impact in the eastern part of the island. NCBA CLUSA, with funding from the U.S. Department of Agriculture through the Agriculture Development Project, is helping to diversify the crops that CCT is buying and selling from their farmers, increasing their membership and strengthening the co-op benefits around the country.

Known for selling high-quality organic coffee to the most competitive coffee companies in the world including Green Mountain and Starbucks, CCT was founded in the 1990s with NCBA CLUSA support and funds from USAID. Bringing more farmers into the fold in regions where coffee can’t grow means expanding the co-op’s crops and diversifying into new markets. In addition to cassava, NCBA CLUSA is supporting seedling farmers to grow vanilla, Robusta coffee, cocoa and black pepper.

[The Los Palos area women’s group sells cassava flour cookies under the brand Timorgator.]“Several factors are needed for success,” said Sam Filiaci, NCBA CLUSA’s Regional Director for Southeast Asia, discussing how CCT determined which new crops to invest in. “Will the farmers grow it? Is there a market?”

For cassava, the market did not exist in the country. But the opportunity was there—East Timor imports over 90 percent of its wheat flour. With the high prices of imported flour, CCT can buy the cassava tubers at double the market rates and be able to sell the cassava flour at half the price of imported wheat flour, and still make a 30-40 percent profit, according to Filiaci.

Not only are the impacts great for farmers, who are getting a high price for their tubers, but the co-op has invested in a mill and is planning to sell the finished flour, bringing the retail profits back to the co-op, ultimately meaning more services available for the same farmers.

The woman’s group in Los Palos sells the cassava cookies under the brand Timorgator, with flavors like sugar cookies and coconut. Substituting wheat flour with the new cassava flour has increased the margin they can make on the products and supports their local cassava farmers, including Abelina, who is a member of the women’s group. And if the cookie’s delicious taste is any indication, the cassava flour market is ready to take off in East Timor. 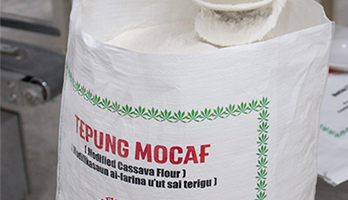 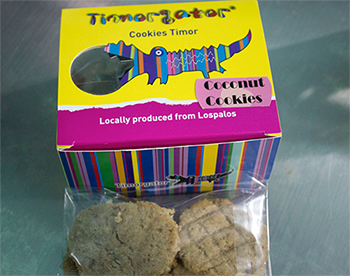