On the shelves this week in Starbucks stores and online, you can find a coffee with citrus and malt flavors from the South East Asian country of East Timor, sourced from the country’s largest private sector employer—a coffee cooperative founded with support from NCBA CLUSA.

Established more than 20 years ago with funds from the U.S. Agency for International Development (USAID) and organizational support from NCBA CLUSA, Cooperativa Café Timor, or CCT, has survived a war with Indonesia and a civil war to become the country’s largest private sector employer. With 22,000 farmer-owners, the co-op also provides an additional 4,000 seasonal jobs.

As a co-op, the coffee farmers govern how their coffee is processed, exported and how profits are reinvested. In 2000, CCT members decided to reinvest Fairtrade coffee premiums into community health clinics for their rural coffee growing regions. Since then, the eight health clinics, three mobile extension teams and 12 community extension teams have served over 2 million Timorese and continue to operate from coffee profits as well as outside grants. Starbucks provided funds to build four community extension clinics in 2008, essential to family planning and pregnant mother pre-natal services. The CCT health system is now East Timor’s largest private health provider.

The co-op continuously listens to its members and addresses community issues. When farmers in the eastern part of the country couldn’t grow Arabica coffee due to the altitude, the co-op partnered with NCBA CLUSA to diversify their crops and bring in more members. Two current projects, funded by the U.S. Department of Agriculture (USDA) and the New Zealand Agency for International Development (NZAID), are bringing new crops to farmers across the country, expanding the coffee co-op’s products into cassava, vanilla, pepper, Robusta coffee and cocoa.

Addressing the agriculture development project, Vicente de Jesus, President of the CCT Board of Directors, said his obligation as a board member is to the farmer. “I am also a farmer. I want to support them because I understand their challenges,” he said.

CCT’s success is largely due to the community-led focus of the co-op. With Timorese leadership listening to farmer’s needs from the beginning, the co-op has grown into a formidable private sector actor in the region. The co-op, with support from NCBA CLUSA, also helped to established institutions of higher learning and co-op management programs.

“The U.S. is very proud of the longterm investment in this project and we look at it as a kind of model for successful development,” said Karen Stanton, U.S. Ambassador to East Timor.

Ethical sourcing of coffee is important to large importers like Starbucks. NCBA CLUSA also partners with Starbucks in other coffee growing regions, providing access to clean water for 25,000 coffee farmers and their families in Indonesia.

An upcoming episode of the documentary series Visionaries features CCT and will be broadcast on PBS stations in Fall 2016. Sign up for our weekly newsletter to receive the latest broadcast details and read about other co-op news and events. 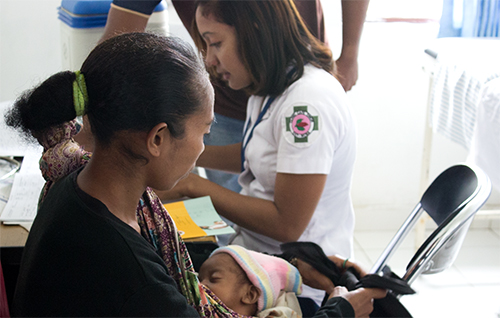