In her village in south central Niger, Rahiba Aboubacar is an anomaly: a woman who has managed to share her expertise in producing enriched flour for the well-being of her community while creating a new source of income for her family.

Rahiba has six children, the youngest of whom is now two years old. As a leader in a Mother-to-Mother group, Rahiba participated in a training in May 2016 where she learned how to make enriched flour using local ingredients like millet, cowpea and peanuts to improve child nutrition.

She decided to test the effectiveness of this porridge with her own daughter when she was six months old. Convinced by the results of that experience, she decided to help women in her village who didn’t have access to ingredients for this enriched porridge.

“I started to make and sell porridge with my own limited resources. At that time, most of my clients were coming from Mother-to-Mother groups because the other women in my village were not yet aware of the benefits the flour could have on the development of their children,” Rahiba said.

At six months old, breast milk alone no longer satisfies all a child’s nutritional needs. NCBA CLUSA’s project, USAID | REGIS-ER in Niger and Burkina Faso, promotes homemade enriched flour for porridge as a local solution to sustainably combat malnutrition among children ages 6 to 23 months. This production has also become a way to increase incomes for mothers in the region.

Mamane Bachir Ousmane, a health provider in charge of the village health center, heard about Rahiba’s initiative and her ability to persuade other mothers to try a new food.

“Every month, Mamane asks me to come and talk about enriched flour at the health center. He also encourages mothers of children between six and nine months to get their flour from me,” Rahiba said. Each month, about 250 women who are either pregnant or have children between 0 and 24 months of age come to the village health center for healthcare—sometimes from as far away as five miles, according to Mamane.

Rahiba displays the ingredients that go into the enriched porridge she makes for her community.Today, Rahiba’s clientele continues to grow because her reputation has spread far beyond the Mother-to-Mother groups in her village. Now, she also reaches women who visit the health center and their relatives.

“When they began feeding their children with the porridge, they quickly noticed the difference and requests became more and more numerous. Surprisingly, even grown-ups love this porridge! I’m very proud to have initiated this activity, because I can help my community and take care of my family with this additional income,” said Rahiba, who serves up to 30 clients a day. Her monthly profit is now about 7,500 CFA, or about $13 USD in an area where incomes are less than $2 a day.

Rahiba sells the flour she produces, but she also builds the capacities of women so that they can produce their own flour at home. Hadiza Saadou met Rahiba at the health center. She’s delighted and thankful for this connection: “Rahiba shows us the right procedure, and she gives us advice on seasonally available ingredients we can add to the flour. Thanks to the enriched flour, my child is really healthy,” Hadiza said.

Rahiba takes pride in boosting interest in enriched flour among women from her village and the surroundings communities. Her husband, Abdou Harouna, a merchant, is also supportive. “I supported her financially and encouraged her for this activity, because I deeply appreciate the positive impact of her actions on the village and our family,” he said.

Rahiba wishes to move her business forward: “Now, I plan to increase my production capacity and begin processing orange-flesh sweet potatoes, which are also very beneficial for children and women’s health.”

To learn more about the USAID | REGIS-ER project, and NCBA CLUSA’s work in the Sahel region, read about our work building resilient communities. 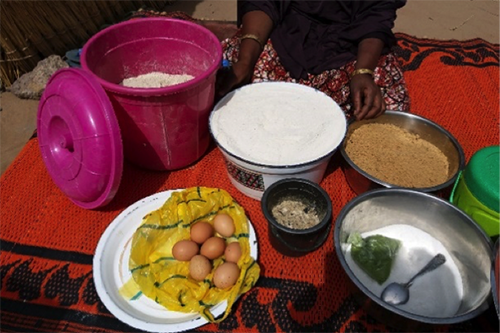