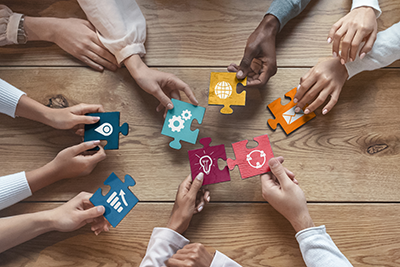 In a new issue of the Principle 6 Newsletter, republished below, Mike Mercer pictures the U.S. credit union system as a long river. Way inland, at the headwaters of the CU System river, is the idea that people, especially ordinary working people, can improve their lives. They can do this by embracing self- initiative, cooperating with others like themselves, pooling resources and working together to achieve progress.

Read the full issue of Principle 6 Newsletter below. And while you’re thinking about “cooperation among cooperatives,” take a moment to consider how you and your cooperative practice this principle. NCBA CLUSA is on a mission to document Principle 6 collaborations across the country so we can identify trends, document best practices and share this knowledge with you—our fellow cooperators!

(writing about top-down culture)…The basic mistake is to assume that ethics is about one group of people (managers) dictating ethics to another group of people (employees). This is not about individual employees making choices for which they are responsible. It is about them doing what they are told. – “Command and Control Banks have got Ethics and Culture All Wrong”, The Conversation, Carl Rhodes, 3-17-16.

Moral suasion is the act of persuading a person or group to act in a certain way through rhetorical appeals, persuasion, or implicit & explicit threats—as opposed to the use of outright coercion or physical force. In economics, it is sometimes used in reference to central banks. – “Moral Suasion”, Investopedia, Adam Hayes, 11-13-19.

Cooperatives are autonomous, self-help organizations controlled by their members. If they enter into agreements with other organizations, including governments, or raise capital from external sources, they do so on terms that ensure democratic control by their members and maintain their cooperative autonomy. – “Principle #4″, Cooperative Principles, Int’l Co-op Alliance, 1995.

Picture the US credit union system as a long river. Just a trickle at the source, a basin where the rain falls. After attending DE training, you’d know the rain as cooperative principles. At the other end, a large delta with many outlets to the sea (credit unions). This river system provides an ecosystem for the salmon (follow me…people and their businesses). These salmon need the river to be born, reproduce and die. For that, they need the fresh water (playalong…products and services).

There are many rivers. Some are larger than the ‘CU System’ river. And some have unique (specialized) nutrients. The salmon have choices. They can’t see what’s going on upstream. They don’t care. If they were born in the CU System river, their desire would be to come back. But they will hear from other fish out in the sea. They will learn about the other rivers.

Way inland, at the headwaters of the CU System river, is an idea…that people, especially ordinary working people, can improve their lives. They can do this by embracing self- initiative, cooperating with others like themselves, pooling resources and working together to achieve progress. The basin where this stream is formed is not decreed by top-down directives or consecrated with moral suasion. Instead, it imagines a thing that will become known as ‘self-help’ or ‘people-helping-people’ downstream.

As the small stream forms, the fundamental idea is embellished with contemporary articulation of guiding principles, values and practices by world-view organizations like the International Cooperative Alliance (ICA) and the World Council of Credit Unions (WOCCU). These organizations foster international learning and cross-border transfers of good practices. One can still drink from the stream without purification at this stage!

As the stream widens, organizations form along the banks to specialize in representation to the national government, its agencies and the major media outlets. CUNA, NAFCU, NASCUS and NCBA-CLUSA are among the most notable. On the other side of the stream, organizations like CUNA Mutual, US Central (now defunct), COOP, PSCU and others have been formed to maximize scale and leverage influence in national markets. These national- scope entities all add critical nutrients that flow downstream. Some provide influence and

governance participation upstream (witness CUNA’s proposal for an 8th cooperative principle to highlight DEI). And, all are governed, controlled or heavily influenced by organizations just down the river.

(Stay with me…this isn’t just a story about rivers)

Eventually, the stream becomes a large river. The support organizations multiply exponentially. Leagues have established camp here, focused on influencing state government and the delegations that are sent to govern at the national level. They are also involved in flood control (ie: consensus building) for the massive delta downstream. Corporate CUs gather CU surplus, provide interfaces with payments systems and help with investment duties. CUSOs of all shapes and sizes leverage influence and gather efficiencies at the local, state and regional scale. Collectively, organizations along the wide part of the river add tremendous value for use directly downstream. And, they significantly influence the national-focused entities back upriver.

Credit unions occupy the delta…where the river breaks up into thousands of individual outlets to the sea. This is where the salmon (people) enter the river system. Their interactions are mostly (but not exclusively) confined to the delta…the credit unions. Some get to swim into the main river channel. Indirect lending brings them in contact with CUSOs along the bank there. Some even make it all the way to the stream, serving on boards and committees of organizationsof the national entities or using TruStage services, for example.

Over time, canals have been built around the main channel. Sometimes, they’re built by the upstream organizations. NAFCU built a canal all the way to the delta. CMG built a canal right out to the sea with its TruStage products. In other cases, canals are started downstream. Credit unions built a canal to CUNA not long ago (Thought Framers called it ‘Choice’). In fact, canals have been built all along the path of the river. WOCCU built one to Leagues foraccomplishing international partnerships. NASCUS was organized as a canal to state regulators, it built a side canal to credit unions.

The CU System river is beginning to look like the undefined water flow from Lake Okeechobee into the Everglades. Hopefully, the openings to the sea don’t start to look like the edge of a mangrove swamp! For now, for the most part, the salmon (our members) still enter the system through easy-to-find credit unions. They come to get the still-relevant nutrients for their financial lives. They don’t stay long…the fewer clicks the better, from their perspective.

Here’s the main thing (and thanks for persevering!)… At every level, Upstream is Optional.

This is unique to the CU System river. Its strength. Its weakness. In every interaction, downstream participants must perceive tangible value from upstream providers. The ‘down- streamers’ are not legally or structurally obliged to do anything upstream. This is nowhere more true than with the salmon. They can swim into any river.

Without real and perceived value, the rain doesn’t fall above the headwaters. The cooperative principles have no sustainable reason to flow downstream. With attention to value creation at every level, the cooperative principles make the ‘CU System’ the river of choice…the salmon will come. And, everybody else will look upstream more constructively.

Ps: Does this mean that Cooperation can make water flow uphill?

Could Cooperatives become a social/economic tsunami in the 21st century?