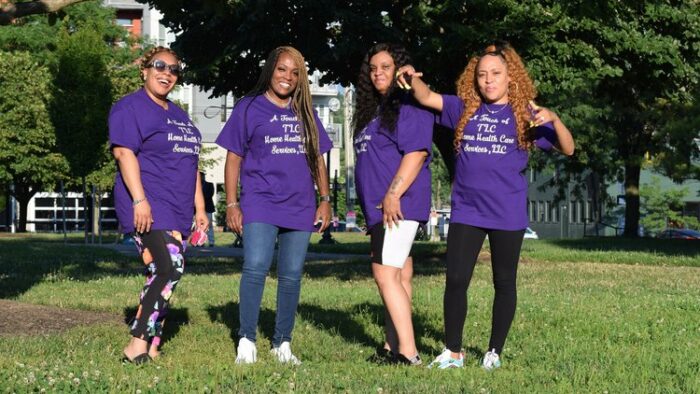 “It’s almost been like a life-or-death situation for me,” says Rebecca Lawson. “To get it up off the ground and get it running, I know that it’s going to do a lot for our church, our community, and it’s going to be a good blessing on us giving back. And it’s definitely made me stronger as an individual.”

Ms. Lawson is a co-founder of a newly established co-operative, T-shirts and Apparel Unlimited, and a recent graduate of the Power in Numbers training program in Cincinnati, Ohio.

Power in Numbers is a 14-week “business bootcamp” for black owned co-operatives, run by non-profit co-op incubator and NCBA CLUSA member Co-op Cincy. The interactive course takes groups of participants through everything they will need to set up a worker-owned business, from legal structure to finance to governance.

The first cohort completed the course this summer, with five co-ops emerging from the process across a range of industries, including food, home care and clothing.

Teams on the last cohort were also offered a chance to pitch for funding at the end of the course, with one co-op named A Touch of TLC Home Health Care Services receiving $10,000 to invest in their venture. In her feedback on the course, one of the business’s co-founders, April Conley, explained that the sessions had helped her to better understand how many clients they would need to be successful in their work, while another member of the team, Victoria Russell, highlighted how the course had helped by sharing successful examples of co-ops from her own community in Cincinnati.

Power in Numbers is part of Co-op Cincy’s wider training program, Co-op U, which started in 2018 to support the development of new co-ops through a program of training, coaching and technical support. The Co-op U program is inspired by Basque worker co-operative Mondragon’s business incubator, Saiolan, and draws on Lean Startup principles, which involves a process of learning through practice, experimentation and gathering feedback from customers. Previous Co-op U courses have been run with a range of different groups, including mixed groups from across the US who come together virtually, as well as more targeted local groups, such as a recent course with a group of Bhutanese refugees.

The Power in Numbers course is specifically targeted to support black Cincinnatians through the launch of co-operatively owned businesses. Cynthia Pinchback-Hines, Co-op Cincy’s racial justice educator and co-op developer, explained how the Power in Numbers course has been “contextualized to reflect the black experience”, saying: “We do so because there are some unique elements to the lived experiences of African Americans that whites don’t necessarily experience.”

Ms. Pinchback-Hines went on to say that they wanted to recognize that in the training and create an environment where participants could feel safe sharing these experiences as part of their learning journey.

“This is a community that tends to not see itself as a powerhouse in the community, not in the sense of business. Because they look around and they’re like, where are we?” she said.

“When we have a group of individuals who tend to be the most disenfranchised … those who tend to have the fewest number of businesses of this type, we thought that we need to devote a lot of background on that.”

Power in Numbers uses stories and case studies to explore and prompt discussion around the barriers faced by African Americans in the business world, as well as highlighting a rich tradition of black co-operativism in the US. The course draws on material from Jessica Gordon Nembhard’s Collective Courage, a history of African American co-operative economic development within the context of the civil rights struggle.

“We use Collective Courage and a number of case studies that are important to bring into the experience an understanding of how African Americans have been involved with co-operative and collective work for, really, hundreds of years,” said Ms. Pinchback-Hines.

“What I say to people who come to Power in Numbers is that during this experience, you’re going to have some “aha” moments – it is very different but extremely rewarding.”

Having worked as an educator before joining the team at Co-op Cincy, Ms. Pinchback-Hines sees education as “everywhere”, and sees this reflected in the way Co-op Cincy works. “We look at education as being foundational and then also being ongoing. So, we learn not only from your typical content experts, but we learn from each other, as well as learning from our experiences and sharing.”

This training feeds into other strands of Co-op Cincy’s work after the course is completed. Once participants have finished the course, they become part of Co-op Cincy’s network, gaining access to ongoing support, opportunities and events.

An example of one of these opportunities is the Biennial Union Co-op Symposium which took place over 12 and 13 November and was attended by several Co-op Cincy’s training graduates, with one co-op from the course even catering the event.

Co-op Cincy’s stated mission is to “create an economy that works for all” through the development of a resilient and integrated network of worker-owned businesses in the Greater Cincinnati area. They focus primarily on network building, supporting existing businesses to transition to worker ownership and supporting new co-operative startups. Ms. Pinchback-Hines described education as “essential to work we do,” which forms part of an organic system of support for co-ops in the area.

“This process doesn’t seem forced,” she explained. “It’s very natural. [People who come on the course] have the ideas that will benefit the people who really really need it in the long run. And I can say that it is extremely rewarding just being a part of that process and to see the lights go on in people’s minds.”