The same day as the White House Summit on Global Development, highlighting the impacts of U.S. government programs over the past eight years, President Obama officially signed the Global Food Security Act into law, bringing a whole of government approach to address food security needs around the world.

“Development is not charity, it is one of the smartest investments we can make in our shared future,” said President Obama during the White House Summit on Global Development.

The strategy focuses on increasing sustainable and equitable agricultural development, reducing global hunger and improving nutrition—especially in the key first 1,000 days between a woman’s pregnancy and her child’s second birthday.

The legislation also promotes country ownership and accountability, improving upon existing monitoring and evaluation practices to ensure transparency and efficiency. The bill was signed along with its companion, the Foreign Aid Transparency and Accountability Act of 2016.

The Summit was a fitting day to sign the bill, highlighting the impact from food security initiatives like Feed the Future and other government programs. Feed the Future and the US Government, through partner projects like NCBA CLUSA’s USAID | Yaajeende project in Senegal, have reached 18 million children with vital nutrition interventions. The USAID | Yaajeende Project has helped to reduce child stunting in project villages by 36 percent.

Share your comments on the White House Conference on Hunger, Nutrition and Health

Community leaders like Hapsatou Kah from Senegal, highlighted throughout the Summit, exemplify the work Feed the Future and USAID can do through partners like NCBA CLUSA. Read more about her story by clicking here. 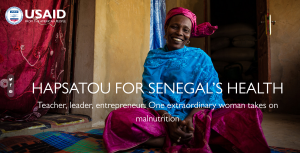 With the Summit, the US Government brought together leaders, public and private sector partners, civil society, and entrepreneurs to recommit these actors to the task of expanding dignity and opportunity across the globe. Attending for NCBA CLUSA was Chief Operating Officer Amy Coughenour Betancourt.

“Today we reaffirm our belief that no child should go to bed hungry,” said President Obama. “Development has to remain a key part of our work to lift up lives, not just overseas but here in the United States.”

Other attendees included National Security Advisor Susan Rice and U.S. Permanent Representative to the United Nations Samantha Power, exemplifying how President Obama has elevated development as a key pillar of foreign policy. The Global Food Security Act also notes that “It is in our national security interest to promote global food security, resilience, and nutrition.”

The Global Food Security Act is part of that recommitment, signing into a law a coordinated whole of government approach for funding agriculture and nutrition, and sustaining the Feed the Future initiative.

“The whole of government approach speaks to the priority this act has for tackling nutrition and food security issues,” said Coughenour Betancourt. “From our flagship Feed the Future Yaajeende project in Senegal to integrating nutrition-led agriculture throughout our programs, NCBA CLUSA is dedicated to alleviating hunger and supporting the agricultural sector as a key to sustainable development.”

Part of this strategy includes cooperatives, which are mentioned as key stakeholders six times throughout the bill. NCBA CLUSA’s Vice President of Advocacy Alan Knapp worked with the bill’s sponsor Senator Bob Casey for over two years to include cooperatives in the language of the Act, and NCBA CLUSA members continued to advocate keeping them as a strategic stakeholder throughout the process during our annual meeting this year.

The final bill reflects both the importance of cooperatives as tools of development as well as part of larger strategy to combat food insecurity at the community level.

Sponsors of the House version of the bill included Representative Ed Royce (R-CA), head of the Foreign Affairs Committee and co-chair of the bipartisan Congressional Cooperative Business Caucus.