Abou Nouhou, a 28-year-old mother of seven, is not only a successful saleswoman in Achalou (a village of the Sabon Machi commune in Niger’s Maradi region), she also serves as a mentor for her village’s Adolescent Girls’ Learning and Support Group, or GASA.

The GASA approach, part of USAID’s REGIS-ER project implemented by NCBA CLUSA in Niger and Burkina Faso, works with adolescent girls, ages 10-18, who are out of school, unmarried and have no children. It seeks to improve their knowledge, attitude and practices regarding health, nutrition and hygiene and strengthen their ability to earn income.

GASA discussions provide girls with the opportunity to meet with their mentor and peers to share their experiences. The meetings help them build self-confidence and strengthen a sense of solidarity. As a mentor to adolescent girls, Abou makes a difference in their future. She is proud of the changes she has seen.

“I helped stop four child marriages in my village thanks to the support of the local health agent, REGIS-ER project coaching and, most of all, to the teenagers’ trust and understanding” said Abou. According to UNICEF, Niger has the highest rate of child marriage in the world. Three out of four girls marry before their 18th birthday and 28 percent become wives before they turn 15.

Abou has developed a close and trusting relationship with the girls in her group. They constantly seek her advice, even outside of scheduled group discussions. “I listen to them, and I provide them support. Because of this relationship, Rabi Idi, who is 13, approached me. She overheard her mother and her uncle discussing the details of her upcoming marriage. Since her father already passed away, the health agent, Amadou Tijani, and I talked with her mother about the issue. After several rounds of discussions and negotiations, we came to an agreement. Rabi’s mother accepted to delay her daughter’s marriage until she turns 18.”

Co-op Weekly
Keep up with news, events and features from NCBA CLUSA

Sakina Oumarou, a 17-year-old member of the group, turned down her marriage outright after seeing Rabi’s success and gaining self-confidence and courage from a community video on early marriage that was shown to the GASA group. The video was produced in her region with actors from her community that speak her language and are dealing with the same situation. Sakina identified with the main character in the video and was motivated to speak up.

These girls found the courage to say no to child marriage after joining the GASA group.“After watching this video, I turned things over in my head. I was turning 17 this year and felt confident about myself. With my mentor’s support, I informed my mother that I didn’t want to be married right now. I asked my mother to watch the video with other members of her mother-to-mother group. I also took advantage of her willingness to listen to me to ask her to also let my younger sister, Rakia, grow up and mature before marrying her off,” Sakina said.

Amadou Tijani, the health agent of the village, confirms: “The community video on the consequences of early marriage strongly reinforces the messages delivered by the mentors. It clearly makes it easier for girls to dare to refuse marriage at a young age and for parents to accept to delay the girls’ marriage. They could all see themselves in the story depicted in the video.”

Abou carries on with the list of child marriages she has been able to stop since becoming a mentor. “Following Rabi and Sakina, Mariama and Louba, two sisters ages 14 and 15, dared to bring up the subject with their parents. To convince them, they stressed the dangerous consequences of child marriage on their health. Their parents agreed to wait before having them married.”

Abou is enthusiastic: “We beat the odds! I feel proud of myself and my community. As members of the GASA group, these girls gain self-assurance and leadership skills. They are way more integrated in community life now than before we had the groups. I am confident that they will be positive role models for girls and women in their community all through their lives.” 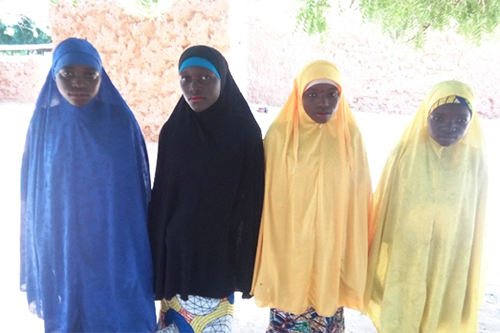