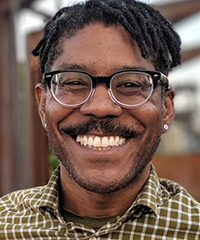 Esteban Kelly is the Executive Director for the U.S. Federation of Worker Cooperatives (USFWC). He is a visionary leader and compassionate strategist who inspires organizers by drawing on science fiction, social theory and collective liberation. Esteban has been a professional facilitator for 25 years, harnessing creative energy and organizational skills to advance food sovereignty, solidarity economy and cooperative business, gender justice and queer liberation, and movements for racial justice. In that vein, he co-founded AORTA (Anti-Oppression Resource & Training Alliance), a worker co-op devoted to strengthening movements for social justice and a solidarity economy by building the capacity of leaders, projects, co-ops and other value-aligned organizations through education, facilitation and consulting.

Formally introduced to cooperatives as an undergraduate in the student housing co-ops at UC Berkeley, Esteban soon began organizing co-ops across Canada and the U.S. with the North American Students of Cooperation (NASCO). Esteban was inducted into NASCO’s Cooperative Hall of Fame in 2011, in recognition of his ten years of service—including seven years on their board and three years working as their Director of Education and Training.

A co-founder and first Board President of the regional cross-sector Philadelphia Area Cooperative Alliance (PACA), Esteban previously worked as Development Director and then Staff Director for the New Economy Coalition (formerly the think-tank known as the New Economics Institute). From 2009-2011, Esteban served as Vice President of the USFWC, and a Board Member of the Democracy At Work Institute (DAWI). He was also on the boards of the Cooperative Development Foundation (CDF) and the U.S. Solidarity Economy Network (SEN). He has served on the board of NCBA CLUSA since 2011, and is an advisor to the Movement for Black Lives’ Policy Table.

Firmly rooted in West Philadelphia, Esteban worked through a major food co-op transition in his eight years as a worker–owner at Mariposa Food Co-op. There, he co-founded its Food Justice & Anti-Racism (FJAR) Working Group and labored to institutionalize the Mariposa Staff Collective. He also rebooted the co-op’s governance process and bylaws, and served on its first board of directors in over two decades. Esteban became a two-term Mayoral appointee to the Philadelphia Food Policy Advisory Council (FPAC), which offers advice for municipal policy and best practices that promote food access, food sovereignty, sustainability and just labor practices for food chain workers. In 2018, Esteban won a Philadelphia Social Innovation Award for Public Policy. Having left the LCA housing co-op after 12 years of active leadership, Esteban now lives with his partner and two daughters through domestic, open adoption.