As not-for-profit financial cooperatives, credit unions exist to serve the financial needs of members-owners, who benefit from reduced fees, higher interest on savings, and lower loan rates. Anyone can join a credit union as long as they are within the institution’s field of membership. This common bond between members can be an employer, geographic location, or membership in a group and is often extended to family members. By law, credit unions are limited in their business lending. However, credit unions designated as “low income” by the National Credit Union Administration (NCUA) may receive approval to exceed that cap for loans that generate economic growth and opportunities within low-income urban, rural and reservation-based communities.

Access: Sharing resources to serve members—rather than amassing them to benefit shareholders—allows credit unions to punch above their weight when it comes to providing members access to financial services. While credit unions range in asset size from more than $100 billion to less than $10 million, on average they have less than 1/10th the total assets of traditional financial institutions and a median size of less than $35.77 million each. Still, these cooperative financial institutions not only deliver convenience, but they also deliver direct financial benefits to members in the form of lower fees and interest rates on loans than their investor-owned counterparts. The financial benefit of these differences totals over $13.8 billion per year, or about $118 per member or $248 per household.

Community Commitment: Many credit unions focus on engaging vulnerable populations within their membership, such as immigrants or young people, helping them enter the mainstream economy and achieve their personal financial goals. Both the individual and the community benefit from the trust credit unions build by being local institutions driven by member services rather than short-term profit. These benefits range from higher home ownership rates for lower-income credit union members to stronger credit scores for individuals enrolled in a credit builder program. Almost all credit unions o er tools and resources to help their members navigate financial challenges. And at the state and national levels, credit unions advocate for policies that protect all consumers.

Democratic Governance And Empowerment: Because credit union members elect their board directors, leadership is responsive to their needs. For many employment-based credit unions, this means offering branch hours before and after the typical workday. A credit union serving California teachers o ers a credit card with the option to skip a payment during the summer when funds are scarce; zero-interest loans to help teachers purchase school supplies; and special low-down payment, and low-fee mortgages. Another serving active duty service member provides comprehensive online services, branches in eleven countries and support for members navigating deployment or reentry.

Equity, Diversity, And Inclusion: Community Development Credit Unions (CDCUs) target communities that are underserved by other financial institutions, which frequently overlap with minority populations. CDCUs fight inequality through high-impact products such as payday lending alternatives, microloans, credit builder loans and financial counseling. There are more than 300 CDCUs serving over 10 million members, concentrated primarily in locations where poverty rates exceed 20 percent and/or median incomes are below 80 percent. All credit unions count at least some low-income communities among their membership, and many have followed the lead of CDCUs by adopting more inclusive policies and products.

Financial Security And Investment: By emphasizing long-term member interests, credit unions create stability that benefits all employees. Credit unions hire almost twice the number of employees per $1 million of assets than banks,—partly because they tend to be smaller, but also because of their higher level of customer service. The CEO compensation package at credit unions, too, contributes to stability for employees and financial security for members. While there is no statistical difference between credit unions and banks in terms of either CEO base pay or retirement income, performance-based income is five times as high in banking. “Other” income, too— like perks, club dues, etc.—was three times as high for bank CEOs. There is substantial evidence that such performance-based incentives contributed to the extreme risk-taking and unethical behavior that led to the financial crisis of 2008-2009.

Growth: Credit unions boast virtually the same yield on total assets as the banking sector and a similar net worth (the percentage of funds that stay with the institution—held in reserve for emergencies). Yet the net income for the sector is consistently 20- 30 percent below that of banks. Where does the extra money go? In the banking sector, profits go to shareholders. In credit unions, these “excess” funds are instead returned to local members in the form of higher rates on savings, lower rates on loans, and a more comprehensive and inclusive array of services. All of these factors contribute to the role of credit unions as anchors of economic growth.

DC Credit Union (DCCU) leadership believes “financial equity is a right, not a privilege,” and its customer services, financial products and community relations put that belief into practice. First established to serve a largely low- and middle-income African-American city government workforce, the cooperative took a big step toward focusing on financial inclusivity when it was asked by regulators to take over the charter of a small, struggling Latino-based credit union. Washington, DC is a city of disparities. Its expansive public spaces, ornate buildings and cultural treasures mask income disparities and pockets of deep poverty. DC is home to 20 percent more “unbanked” residents than the national average.

Nationally, the median family wealth for white families is ten times more than African-Americans families and eight times more than Hispanic families. With a membership made up of people of color, DCCU was motivated to bring underserved communities into the financial mainstream. DCCU meets its members where they are. Branch hours are designed to accommodate the work schedules of members and include bi-lingual stain primarily Spanish-speaking areas. The credit union has accounts that do not require social security numbers, allowing undocumented immigrants and minors without responsible adults to act as account custodians to access financial products and services.

Working with the Government of the District of Columbia, DCCU provides all participants in the District’s youth summer employment program with automatic direct deposit into their own non-custodial accounts. The credit union couples access to financial products with education resources.

>Participants in the summer youth employment program receive education in basic budgeting. Credit union members have access to guides and classes on topics like rebuilding credit, saving for a major purchase and fraud protection. Dedicated sta help participants access opportunities like free tax preparation services or navigate the unfamiliar world of finance. Recognizing that members may not have collateralizable assets, DCCU has partnered with the city, local nonprofits and religious institutions to o er a variety of unsecured loans.

These include “citizenship” loans to help front the costs of legal services for immigrants working with approved partner nonprofits, seasonal loans for faith-based neighborhood civic clubs, and loans to cover the down payment required on home purchases. With $65 million in assets and 11,359 members, DC Credit Union punches above its weight by responding to the needs of its members, maintaining close ties with city and community institutions, and providing underserved communities with opportunities through access to financial services 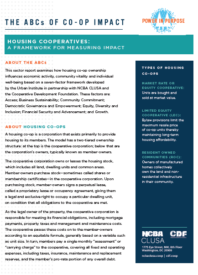 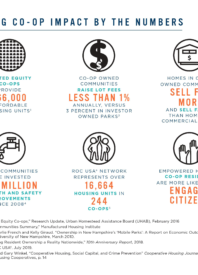 Credit Union Co-ops By the Numbers