In a worker-owned cooperative, employees govern their business as a democracy. Each worker-owner has an equal stake and equal vote in the co-op. From a brewery to a home care agency, any business can adopt a cooperative structure for the benefit of its employees.

Worker co-ops view employees not as a commodity, but as citizens with the same rights and responsibilities. Recently hired employees and veteran managers alike receive an equal share of the co-op’s profits and losses. Worker cooperatives create stable, empowering jobs that benefit the workers and surrounding communities.

A worker-owned cooperative focuses on benefitting its employee-owners, not outside investors. Learn more about the positive impact of worker co-ops:

Since employees are the sole owners of a worker co-op, they work together to make decisions that will improve the business and local economy. Worker cooperatives give revenue back to their communities, creating an inclusive economy and sustainable alternative to investor-owned companies.

The cooperative business model enables workers to be their own bosses and create an inclusive local economy.

Many national and global associations work to advance the movement in democratic worker-ownership, including:

Did you know that three million co-ops contribute to economic growth and stable employment for 280 million people around the world? At NCBA CLUSA, we provide education, opportunity and advocacy for the entire cooperative movement.

As the largest cooperative business association in the world, NCBA CLUSA is the voice for cooperative enterprise across the globe. Our team, members and partners help educate stakeholders about co-ops and how they create healthy, equitable communities.

Contact us online to learn more and consider becoming a member today.

The ABCs of Worker Co-op Impact

Worker-owned cooperatives give workers more control over the work process and a greater share of company earnings. They are also an excellent self-help vehicle for promoting work for hard-to-employ populations, such as returning citizens, or workers in rural and deindustrialized areas.

Worldwide, worker-owned enterprises stay in business longer and make less frequent use of lay-offs, leading to greater stability among these enterprises. In addition, worker cooperatives are more productive than conventional businesses in the same industry, with employees working “better and smarter.”

In addition to providing employment and making a profit, many worker cooperatives have a social, cultural or environmental purpose. This purpose may involve the central product of the business, such as solar energy or fair-trade products. Or it may be a defining attribute of a co-op working in an otherwise conventional industry, such as a commitment to reducing the carbon footprint of the manufacturing process. On a local level, worker-owned cooperative employees are much more likely to volunteer in their community compared with the general population.10 And, worker-owners are more likely to vote.

The democratic nature of cooperative ownership positively impacts job satisfaction and productivity. Worker control may be a key factor in the superior performance of worker-owned firms around the world.11 While the practice of consulting with worker-members may initially be more time-consuming, in the end, a decision made on a collaborative basis typically takes less time to implement. Thus, an engaged and informed membership saves the company money and effort when compared with the practices of competitors in the same industry.

From the pay ratio to the diversity of the workforce, worker co-ops excel at creating an equitable, diverse and inclusive work environment. The average pay ratio between the lowest and the highest-paid employees at a worker co-op is 2:1—a stark contrast compared to the CEO-to-worker pay ratio of 300:1 at the average publicly traded corporation in the U.S. The largest worker-owned cooperative in the U.S. has a workforce (and ownership base) comprised almost exclusively of Latina and African American women, a population not otherwise highly represented in business ownership.

Three-quarters of worker-owners report that overall pay and benefits at their co-op are similar or superior to compensation at their previous workplace and that the average value of their capital accounts—the financial measure of their ownership stake—is modest, but real. A majority also reported that professional development opportunities are better at their co-op than at previous jobs. For example, Cooperative Home Care Associates maintains a workforce development program that provides free training for more than 600 low-income and unemployed women annually and serves as a significant driver of employment in the Bronx.

Worker-members are by definition local owners, generating significant potential economic multiplier effects as wages and profits are kept in the community rather than sent to outside investors. Worker ownership keeps assets invested locally and selling a business to employees is an increasingly popular alternative for retiring small business owners interested in preserving the legacy of their business. A cooperative, committed to taking the long view, is a positive economic development partner from an overall community perspective.

Alvarado Street Bakery, a worker-owned cooperative in Petaluma, California, built a model workplace in a uniquely cooperative manner. In the Bay area, where the cost of living is 80 percent above the U.S. average and housing costs are three times the national average,14 the bakery blends democratic decision making, innovation, growth and technology not only to make certified, organic bread but also—critically—to provide worker-owners the compensation they need to live in the community where they work.

To meet this challenge, the bakery had to embrace growth and technology. “It’s simple math,” said Joseph Tuck, Alvarado Street’s retired coordinator. Simple or not, many workers see technology and automation as threats to their livelihood, with investors pocketing the money saved on wages and workers out on the street. Because Alvarado Street is a worker-owned co-op, every major investment in new technology is subject to a democratic decision-making process. “You have to make the case to workers, even for efficiency gains,” said General Coordinator and CEO Bryan Long. “We are not out to replace people . . . we need to find the balance between creating jobs and making sure those jobs are high quality,” he added.

Established in 1977, the co-op’s embrace of technology and growth came fairly early in its history when another whole grain bakery went out of business and Alvarado Street suddenly inherited their accounts. Co-op members were forced to invest in machinery simply to meet the demand of the contracts and found, in the process, that wages went up. As time went on, the concept of buying into technology became more and more accepted, as workers saw the benefits. “We wanted to be able to offer a good, stable standard of living,” Tuck said.

While the co-op pays tiered wages based on the skill of the worker, it is an equitable employer, with a rich benefits package that is spread equally across the workforce enabling a degree of financial security for workers seldom seen in the industry. Alvarado Street offers a generous 401(k) plan that requires no match from workers and averages more than $5,000 per person, per year in contributions. Gainsharing bonuses are paid every quarter in equal amounts to every worker, pro-rated for full and part-time workers. Full health insurance is also part of the plan, with alternative care such as chiropractic and acupuncture covered. And workers with 10 years tenure get six weeks of paid vacation.

Many worker-owners stay with Alvarado Street long enough to accrue that benefit. The average tenure at the co-op is currently 13.5 years, an exceptional show of loyalty to an exceptional workplace. 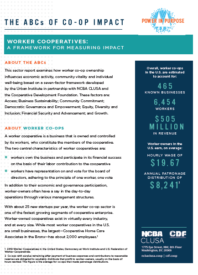 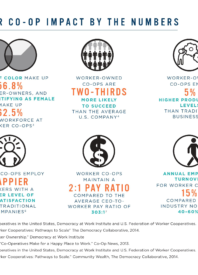 Worker co-ops by the numbers