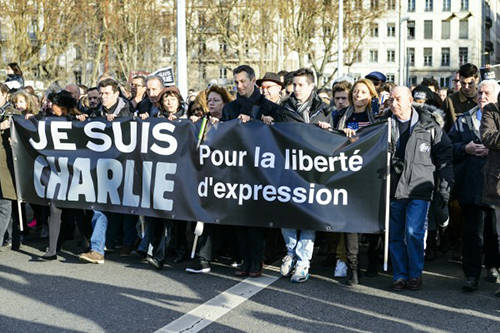 Members of the International Co-operative Alliance’s Principles Committee, meeting in Paris shortly after the attacks on Charlie Hebdo, released a statement condemning the attacks and expressing solidarity with cooperators and citizens of France. Co-operative News published this news release highlighting the statement and similar moves to express unity:

Following the recent deadly attacks in Paris, co-operators from across the world have voiced their solidarity with the citizens of France, while highlighting their commitment to free speech and expression. The movement has also called for peace and fraternity as a means to build a better society for all.

This month, the International Co-operative Alliance’s Principles Committee met in Paris to work on the draft guidance notes on the principles that will be adopted at the General Assembly in November. With the meeting taking place in the aftermath of last week’s attacks, the committee issued a statement of unity.

The document condemns the actions and states that free speech and liberty “are indivisible from the vision, values and aspirations of co-operators throughout the world.” Reaffirming its commitment to peace and social cohesion, the committee highlights the inclusiveness of co-operative enterprises.

“From their beginnings, co-operatives have been inclusive organisations, welcoming into membership people regardless of faith, gender or ethnic origin to work together for the common benefit of all. The only limit is intolerance of actions that threaten and undermine the democratic values and principles that underpin co-operation and civil society,” the statement reads.

The French co-operative movement has also expressed solidarity towards the journalists of Charlie Hebdo and their families. The Confederation of Co-operative and Participative Societies (CG Scop), as well as CoopFR, the national trade body, have displayed the “Je suis Charlie” logo on their respective websites.

Various French co-ops have adopted the slogan, among them Le Zébre, a “café politique” based in Lyon. Two years ago the co-op, which runs its own online weekly magazine, hosted the launch of the book Charlie Hebdo les 20 and (“Twenty Years of Charlie Hebdo”). Around 250 people who attended the launch got to meet cartoonists Charb – the magazine’s editor, who was among those killed in the attack – and Catherine.

Charb – full name Stephane Charbonnier – had been an occasional contributor to Le Zébre’s website since 2006. To pay tribute to Charb and the editorial team of Charlie Hebdo, Le Zébre invited people who had taken part in the launch to glue copies of signed books on the co-op’s window.

“In this moment, Italian co-operators stand next to the families of the victims, the French people which mourn their dead and all those who, with the only weapon we know – democracy – fight against the barbarism of violence.”

Argentinian co-operators have expressed solidarity too, reiterating their commitment to democracy, freedom of expression and human dignity.

“In such circumstances, we must learn from our values and principles and strengthen ties to build peace, whose fundamental features are democracy, equality and solidarity, which our movement aims to put into practice across all areas of human activity,” commented Ariel Guarco, president, and Ricardo López, secretary of Cooperar, the national apex body for co-operatives. “May the condemnation of violence and barbarism lead to a demonstration in favour of peace and fraternity – the only way towards the society we all aspire to.”