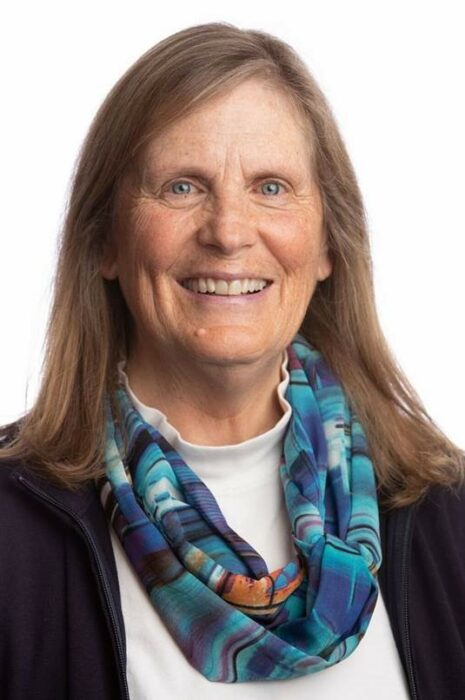 Show your appreciation for Karen’s work by adding your name as a “Friend of Karen Zimbelman.” Your name will appear on the Karen Zimbelman page of Heroes.coop and in the Hall of Fame Commemorative Program. The Hall of Fame will be held on October 7, 2021 at the National Press Club in Washington, DC.

A lifelong cooperator, Karen Zimbelman lives and breathes the cooperative values and principles. For over forty years, her accessible voice and unyielding commitment to the cooperative way has served to guide the success of cooperatives that span sectors including consumer, housing, worker, and credit unions. Described as a gravitational center for cooperatives, Karen was an early innovator in the local, regional, and national cooperative movement, playing a pivotal role in advancing cooperative enterprises from board rooms to the retail floor.

Karen’s cooperative career began in the 1980s at the North American Students of Cooperation (NASCO) where she implemented board of director trainings. Since then, Karen has worked at North Coast Co-op, NCBA CLUSA, Rochdale Institute, and National Co+op Grocers (NCG). After three years as North Coast Co-op’s Director of Membership and HR, Karen began her next career phase as a cooperative consultant. During this time, she served as the newsletter editor for the Association of Co-op Educators (ACE), developed a tailored co-op orientation manual for food co-op staff, and served as the Executive Director for the Cooperative Grocers’ Information Network (CGIN), the Northwest Cooperative Grocers’ Association and Pacific Cooperative Grocers’ Association.

Under Karen’s leadership, CGIN became a vital consumer co-op resource housing an extensive library of job descriptions, operation manuals, recipes, board training, and much more. CGIN fostered cooperation among cooperatives by offering a way for start-up and smaller food co-ops to connect with larger, more established food co-ops and for all co-ops to network and share resources. During her time at CGIN, Karen authored and published How to Start a Food Co-op, which became the foundation of Food Co-op Initiative’s Guide to Starting a Food Co-op.

As the founding Executive Director for two regional cooperative grocers’ associations, Karen established and managed regional supply agreements, promotions, training, audits, and other programs. In that role she became an important contributor to a movement to form a national food co-op association -– an effort that ultimately resulted in the formation of the NCG. Karen’s voice was critical to thinking through operational scenarios and contributed to the creation of a rules-based system that delivered unparalleled value to 100 food co-ops. Today, NCG represents 148 food co-ops in 39 states with over 1.3 million consumer-owners, unifying natural food co-ops in order to optimize operational and marketing resources and strengthen purchasing power.

Formed under the NCG Western Corridor to bring governance and operational leaders together to explore best practices for boards of directors and the board/general manager relationship, Karen conceived and designed Leadership Education and Development (LEAD). Under her tutelage a series of well attended, regional one-day workshops were organized to foster collaboration between board members and general managers. Karen also created the LEADer as a complement to these trainings. The 26 study-guide style issues of LEADer covered topics like board perpetuation, member engagement, board orientation, financial indicators, managing risk, and strategic visioning. She was also a valued member of the Howard Bowers Fund assuring the Fund maintained true to its mission and volunteering at Fund events.

Karen has organized hundreds of trainings benefiting thousands of cooperative board members over her 40-year career. She was awarded the Cooperative Service Award for dedicated leadership and service to cooperatives at the Consumer Cooperative Management Association (CCMA) Conference in 1994 and recognized for her outstanding contribution to cooperative education by ACE. Karen’s sincerity, intensity, and zeal for the cooperative way is evident in the way she builds and protects the integrity of cooperatives.