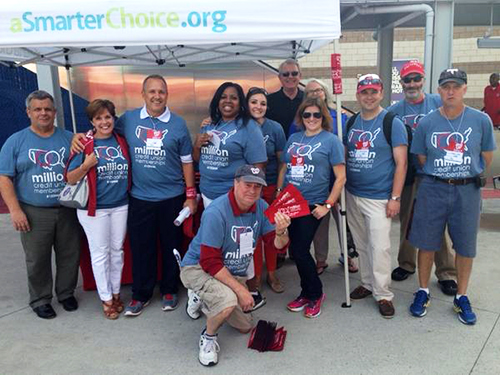 In June, credit unions surpassed 100 million members nationwide. A team from the Credit Union National Association was on hand September 26 to celebrate the milestone and advocate for “A Smarter Choice” at Nationals Park in Washington, D.C.:

Credit unions and the 100 million memberships milestone were on full display at a recent game between the Washington Nationals and the Miami Marlins.

The Credit Union National Administration had two booths at the game, passing out slap koozies and other credit union materials to those in attendance, with help from volunteers from local credit unions.

The allure of the credit union system intrigued many nonmembers, included Washington Nationals staff, who were directed to ASmarterChoice.org to find a credit union that could meet their needs.

In addition to slap koozies, the first 20,000 fans who entered the ballpark received calendars with the 2015 Nationals’ schedule, which also featured the 100 Million Memberships logo.

Political commentator Charlie Cook was featured in a video message that played on the scoreboard just prior to the first game of the Friday’s day-night doubleheader. In the video, Cook praised credit unions for reaching the 100 million memberships mark, and for providing access to financial services to members nationwide.