Adding to the list of high-quality exports from East Timor, Cooperativa Café Timor (CCT) sent off its first shipment of cloves this month, the first time the spice has ever been exported from the country.

As part of NCBA CLUSA’s U.S. Department of Agriculture-funded Agribusiness Development Project, nearly 400 farmers are now growing cloves in the country, which introduced the spice to the island in an effort to diversify agriculture and exports for East Timor, typically known for its high-quality coffee.

“It’s very much in line with what the government is doing in diversifying agriculture to enable Timor L’Este to move in an export direction,” said East Timor’s Prime Minister Dr. Rui Maria de Araújo during the inaugural shipment ceremony.

During the ceremony, the prime minister joked that now that the door was open, East Timor should be exporting a new product every six months. In addition to cloves, the USDA Agriculture Diversification Project has also introduced cassava, pepper, cocoa and vanilla, among other crops

The first cloves shipment, weighing 10,000 kilograms, went out to McCormick & Company, known for its ethical sourcing of spices and a partner on other NCBA CLUSA projects.

“It is very encouraging to see Timorese working together with the government and development partners,” Prime Minister Araújo said.

With high-quality coffee already on the market, East Timor is looking to expand its reputation to include high-quality products and spices across various markets.

Working with farmers on the eastern part of the island, diversifying the co-op’s agriculture means more farmers can sell to and become members of Cooperativa Café Timor. Diversification is a win-win for both the co-op, which experiences growth, and the new farmers, who benefit from membership rates for their crops along with high-quality training. 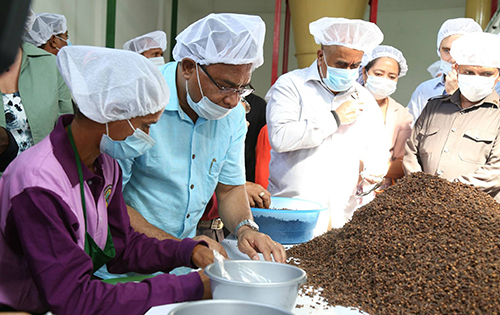