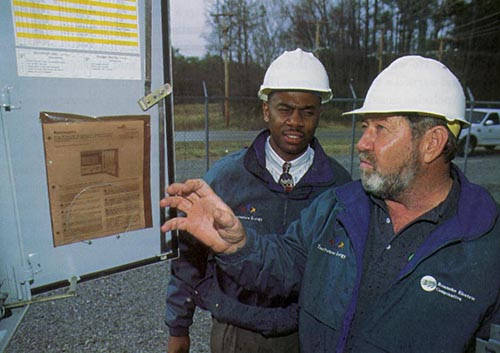 Since its formation in 1938, northeastern North Carolina’s Roanoke Electric Cooperative (REC) has steadily grown and now serves more than 14,500 members in Bertie, Halifax, Hertford, Northampton, Gates, Perquimans and Chowan counties. A pilot program funded through the U.S. Department of Agriculture is now making access to sustainable energy an affordable reality for these customers. The North Carolina Sustainability Connection published this article:

REC is committed to making sure its members enjoy reliable, affordable energy and a high quality of life. However, the region is largely dependent on agriculture, and has struggled economically since the 1980s, when small farm revenue began to shrink. The cooperative has created a variety of innovative programs to make sustainable energy investments within reach of everyone, including members without access to cash or credit. The co-op partnered with the U.S. Department of Agriculture to launch a pilot program to help finance energy efficiency upgrades, and recently announced a community solar project that allows members to purchase panels in the cooperative’s first solar field.

There are a number of actions that households and businesses can take, like insulating walls or switching to a high-efficiency water heater, that can drastically reduce energy bills. However, many of these actions have a large upfront cost. The Roanoke Electric Co-op had previously tried to encourage members to make investments in energy efficiency upgrades, but the short-term cost outweighed the long-term benefit for many members.

“We’ve tried a couple of on-bill financing programs, trying to get members to make investments to bring their utility consumption and their bills down, but we got a very low take rate on them. Adding on one additional bill is something that most people don’t have an appetite for,” said Curtis Wynn, president and CEO of Roanoke Electric Co-op.

The new “Upgrade to Save” program allows members to make energy efficiency upgrades without adding on any additional costs to their bills. The program is made possible through USDA’s new Energy Efficiency and Conservation Loan Program. The program expands what electrical cooperatives can do with the money they borrow from the Rural Utility Service. In the past, cooperatives have used these funds to finance infrastructure investment, like poles and power lines, but now they can also use these funds to finance energy efficiency upgrades in members’ homes and businesses. In exchange, the member agrees to share his or her savings with the cooperative, allowing the cooperative to pay back the loan.

“Members don’t have to take out a promissory note, or a lien against their property. The risk is being taken on by the electrical cooperative, and we’re tying that risk to whoever dwells in that location where the upgrade is done,” Wynn said. “If someone moves, the next person who comes in behind them will still be obligated to make that repayment back to the cooperative because they are receiving the benefits of the upgrade.”

Currently the program covers upgrading heat pumps, air ducts, insulation and air sealing, water heater wraps and LED lights. REC is one of two electrical cooperatives piloting the program with the USDA. If the program is successful, it could be extended to cooperatives all across the country.

Until now, REC purchased all of its energy wholesale, but this year it will begin to generate its own energy from a community-shared solar field. Though many REC members understand the value of investing in renewable sources of energy, few were in a position to invest in solar by themselves. Many members are renters or live in wooded areas, and even those owning homes with regular access to sunshine could rarely afford the high cost of installation and insurance.

In response to members’ increasing interest in renewable energy, REC put together a community-shared solar farm. Members of the cooperative can purchase a panel for $480 ($525 after March 2), and the energy that the panel produces will be credited to the members’ monthly bill. The cooperative agrees to take care of all system maintenance expenses, allowing its members to invest in solar for a simple one-time fee.

This first project will consist of 360 panels, but if there’s enough interest, Wynn said, there will be plenty of opportunities for follow-up projects.

Roanoke Electric Cooperative was formed to serve an area where the return on investment was too low for traditional energy companies to want to electrify. Thanks to the Rural Electrification Act, the community was able to access the funds it needed to build its own electrical infrastructure. Today, members enjoy an ownership share of the 2,000+ miles of lines that stretch across the seven counties.

Soon, cooperative members will also own hundreds of miles of fiber optic cables, which could someday be used to deliver high-speed broadband. The $4 million fiber project that will connect all of REC’s substations is primarily to take care of internal, operational needs. However, the cooperative will be able to lease excess capacity to internet service providers (ISP) who want to offer high-speed service to the region. Currently, the return on investment is too low for commercial ISPs to take on the kinds of fiber buildout that ATT has underway in the Triangle region. The cooperative’s fiber backbone will increases ISP’s potential return on investment, incentivizing a network upgrade that will be vital to the long-term economic health of region. Wynn sees the fiber project as a modern version of what the cooperative members did in 1938, when they took the regions electrical future into their own hands.

The cooperative structure ensures that REC works on behalf of its members, rather than for investors. Wynn’s job is to provide reliable energy at a fair price rather than to make as much profit as possible for private investors.

“Our biggest difference is we are not for profit. Any margins we make at the end of our year we return to our members. We are owned and governed by the constituents who we serve,” he said.

Under Wynn’s leadership, Roanoke Electric Cooperative has become increasingly involved in economic development efforts in the communities it serves. In 2001, the cooperative launched The Roanoke Center, a non-profit subsidiary with a mission to catalyze, strengthen and support sustainable economic and community development in the region. The center has helped secure more than $4 million in loans and grants for small businesses in the counties it serves.

Additionally, Wynn helped found the Roanoke Chowan Partners for Progress, a grassroots community development corporation that coordinates the economic development efforts of various government, nonprofit and community organizations in the region. The cooperative also gives away thousands of dollars in Bright Ideas grants each year, allowing local teachers to take on innovative projects. The REC and its subsidiaries have won numerous awards in recognition of their service to the northeastern region of North Carolina.