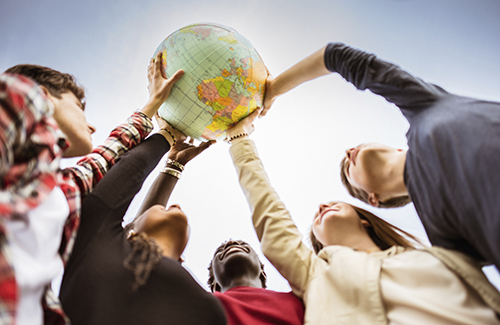 In a recent issue of the journal Nature, a group of engineering and economics professors say the “science of cooperation” should inform the global approach to curbing carbon emissions. Click through to read Co-operative News‘ report on the article, published in light of this week’s COP21 meetings in Paris. Also in Paris this week, academics and cooperators are saying that co-ops should have a bigger role in the climate change conversation. “Co-ops have been doing sustainability for 120 years, long before the rest of the world understood the concept,” said Yuill Herbert of Sustainability Solutions Group, a worker co-op based in Canada.

In the journal Nature, David J. C. MacKay, Peter Cramton, Axel Ockenfels and Steven Stoft say the current “pledge and review” approach to cutting carbon emissions should be replaced with a co-operative approach. Under “pledge and review,” countries promise to reduce emissions by amounts that will be revised later enabling “an upward spiral of ambition over time.”

“History and the science of co-operation predict that quite the opposite will happen,” MacKay and his colleagues said. “If some nations sit back and rely on others’ efforts, the incentives for anyone to act are weakened.

“A review of the first phase of the Kyoto Protocol at the 2012 UN climate meeting in Doha, for instance, resulted in Japan, Russia, Canada and New Zealand leaving the agreement, frustrating those who kept their promises. Success requires a common commitment, not a patchwork of individual ones.

“Negotiations need to be designed to realign self-interests and promote cooperation. A common commitment can assure participants that others will match their efforts and not free-ride.
“A strategy of ‘I will if you will’ stabilizes higher levels of cooperation. It is the most robust pattern of cooperation seen in laboratory and field studies of situations open to free-riding.”

MacKay and his colleagues said a global carbon price—so far excluded from international negotiations—would be the ideal basis for a common commitment. “A price is easy to agree and handle, relatively fair, less vulnerable to gaming than global cap-and-trade systems and consistent with climate policies already in place, such as fossil-fuel taxes and emissions cap-and-trade,” they said.

“Forty years of empirical and theoretical literature on cooperation confirms that individual commitments do not deliver strong collective action. Cooperators find that defectors take advantage of them. Ambition declines when others are revealed to be free-riding.

“Enforcement is widely thought to be the missing ingredient in the Kyoto Protocol and crucial for the success of a Paris agreement… with individual commitments, there is nothing meaningful to enforce, whereas enforcement strengthens a common commitment.”

“A fresh approach is needed, one guided by the science of cooperation,” they said. “A common price commitment would harness self interest by aligning it with the common good. Nothing could be more fundamental.”