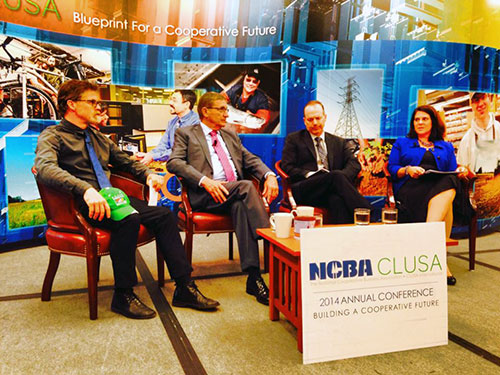 Co-ops are an integral player in the push to establish new linkages between the U.S. government and the private sector to end hunger, a panel of experts from the United States Agency for International Development (USAID) and U.S. agriculture and food cooperatives said during a global food security panel at NCBA CLUSA’s 2014 Annual Cooperatives Conference earlier this month.

Jim Barnhart, deputy assistant to the administrator of USAID’s Bureau for Food Security, launched the September 10 discussion led by NCBA CLUSA’s COO for International Development Amy Coughenour, who asked Barnhart how co-ops are viewed within the “toolset of development.”

“The challenge for [the U.S. government] is that we need to change the way we think about working with [cooperatives],” Barnhart said. “We need to start thinking of you as part of the private sector, but organized in a very different way. We have not yet done a deliberate outreach to the co-op movement as development partners,” he added.

While Barnhart acknowledged the role of the U.S. government to reach out to the co-op community, he also urged cooperatives to raise their collective voice. “If you’ve got ideas, we want to hear about them and figure out how we can work together. It’s the critical step in getting rural, smallholder farmers out of poverty.”

During the past decade, the U.S. has made major strides in its efforts to end world hunger, through Feed the Future and other food investments combating poverty and stunting. But global food needs remain staggering. An estimated 870 million people worldwide go hungry every day, and, by 2050, experts say massive population growth and changing diets will require a 70 to 100 percent increase in food production to ensure sustainability.

Empowering rural, smallholder farmers is central to the government’s strategy. One challenge, Barnhart said, is just how “small” smallholder farmers really are, due to the widespread lack of clear property rights and laws governing permissible land use.

“Smallholders are stuck on very small plots of land that are economically unviable. They are caught in cycle of what I call ‘sustainable poverty,’” he said. Organizing smallholder farmers into cooperatives is one solution, he said.

That’s the approach of Equal Exchange, a worker cooperative best known for its pioneering Fair-Trade work with more than 50 smallholder co-ops in 25 countries worldwide.

Panelist Rodney North, spokesperson for Equal Exchange, highlighted a co-op in the Dominican Republic composed of 8,000 smallholder cacao farmers who—through support from Equal Exchange—launched a cooperative business and are now one of the country’s biggest exporters.

“They’ve weaned themselves off of exploitative relationships, and they’re getting better, Fair-Trade prices for their high-quality, organic cacao,” North said.

That’s also the case with Equal Exchange’s other products, including coffee, chocolate, tea and bananas. “I’m constantly reminding people, ‘That banana came from somewhere. There’s a family there and a story behind it, and if you knew it, you’d probably care, and you might not put up with what normally goes on,’” he said.

Coughenour asked the panelists how Principle 6 (cooperation among cooperatives) and 7 (concern for community) inform their business practices, and whether serving the interests of member-owners and smallholder farmers is ever a difficult balancing act.

“Many people assume it’s a trade-off,” North said. “They assume more for the farmer in El Salvador means less for my business.” He went on to say that to think only of profit is a “pathological” way to conduct business and the “reason why so many people aren’t fulfilled by their jobs.”

“If you think of your home life, we’re constantly juggling responsibilities. That balance feels natural to us, so there’s not the tension that some people may assume over who’s going to get the best end of the deal,” North said.

“The corporate approach to business says that businesses exist to benefit stockholders and investors, but there’s another approach taught in business school, and that is that there’s only one reason to form a business—to provide a product or service that the market needs,” Stroburg said.
In its efforts to “be a good corporate citizen,” he said, West Central Cooperative addresses the need for higher-quality seed and market development. Creating foods with tastes and textures that mirror the typical diet in West Central Africa is crucial to getting farmers there to adopt nutrient-dense versions of traditional crops.

“So much of the co-op movement is really driven from a passion for humanity and a desire to help our fellow man, so the market isn’t the only cooperative interest, but there does have to be an economic driver,” he said.

One “product or service” universally needed within the developing world is expertise, Barnhart said, referring to a recent trip to a cooperative factory in Ethiopia that produces feed sacks.

“They told me, ‘We don’t need money, but we do need expertise on how to manage people, institutions and finances.’ And that’s exactly what they need,” Barnhart said.

NCBA CLUSA’s Farmer-to-Farmer program, he said, is an “extraordinary” example. The program matches skilled farmers and technicians with smallholder farmers and co-ops in Senegal and El Salvador to maximize productivity and outcomes.

“The expertise in this room is exactly the kind of expertise that these folks need as they try to sort out how they’re going to survive food insecurity, growing families and an expanding population,” he added.

Still, Barnhart urged more action. “I would encourage all of you to be more involved. We partner with the private sector, and co-ops would fit right into that picture,” he said.