A program that not only provides low-income Mainers with fresh, healthy produce, but also helps preserve local farms is transforming the state’s food system with support from independent grocery purveyors like the Portland Food Co-op, where Rep. Chellie Pingree (D-ME) is a proud member.

Launched last year, Maine Harvest Bucks is a federally funded program that broadens access to fresh fruits and vegetables and is credited with addressing childhood obesity, providing avenues out of poverty and increasing the sale and consumption of locally-grown produce. Here’s how it works: for every $1 spent on SNAP-eligible products, shoppers receive a $1 voucher to spend on local fruits and vegetables, making it easier to access the abundant produce Maine is known for on a restricted food budget.

The program is a model for what can happen when the federal government partners with cooperatives and other markets that predominantly sell local food, Pingree said during the Legislative Breakfast at NCBA CLUSA’s Co-op IMPACT Conference this month.

“We know that the barriers to healthy food are either physical or financial access. So it’s a good example of a win-win program where a good idea gets into the Farm Bill and gets bipartisan support. More people get access to healthy, local produce and more people understand the benefits of belonging to a food co-op,” Pingree said.

NCBA CLUSA’s Legislative Breakfast, sponsored by CHS Inc., brought together key elected officials—Pingree is a member of NCBA CLUSA’s Congressional Cooperative Business Caucus—and representatives from the U.S. Department of Agriculture to explore how best to elevate cooperatives in public policy discussions and decisions.

During her eight years in Congress, Rep. Pingree has sought to leverage rural development funds by investing in local and regional food markets. She’s found co-ops to be ideal partners in that endeavor and believes recent federal budget proposals to eliminate co-op development programs are deeply “shortsighted” for rural communities dependent on the business model, including many in Maine—a third of the state’s lobsters alone are sold through local co-ops.

According to the U.S. Department of Agriculture (USDA), 160,000 U.S. farmers sold $8.7 billion in local food to consumers, retailers, institutions and local distributors in 2015. Seven hundred of those farmers grow cranberries for Ocean Spray, a family farmer-owned agriculture cooperative and premier sponsor of NCBA CLUSA’s 2017 Co-op Festival.

The 2017 Co-op Festival “told a powerful story” of what cooperators are doing to “build stronger communities and a better world,” the USDA’s Anne Hazlett told IMPACT Conference attends. Here, she chats with farmers in the festival’s Ocean Spray cranberry bog. Anne Hazlett, Assistant to the Secretary for Rural Development at USDA, spent time during the festival listening to Ocean Spray farmers like Stan Lee who are responding to tough times with innovations like new product development.

Hazlett, who also spoke at the IMPACT 2017 Legislative Breakfast, said innovation as a way to preserve the rural economy by evolving it. It’s also one of USDA’s current focus areas for rural America: infrastructure, partnerships and innovation.

“USDA shares that passion for innovation. We are committed to changing the business environment for rural entrepreneurs,” Hazlett said.

Hazlett also used her remarks at IMPACT 2017 as an opportunity to announce that the USDA’s Interagency Working Group on Cooperative Development would be reestablished in early 2018. The working group brings together 13 federal agencies to empower cooperatives and is critical to NCBA CLUSA’s advocacy agenda.

“I think [the working group] is an opportunity to work hand-in-hand with those of you who work on the frontlines to foster ownership and opportunity in your community. Together, we can find ways to streamline, fix and enhance federal processes to foster innovation and, ultimately, economic empowerment in the communities in which you live and work,” Hazlett said.

“We want to be your partner in building prosperity,” she added. 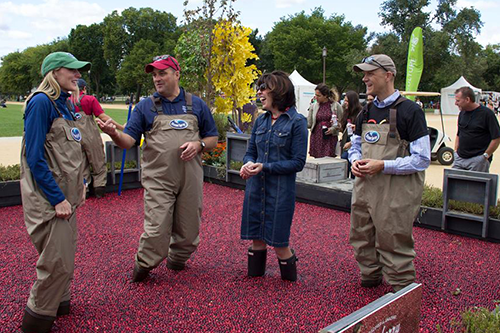