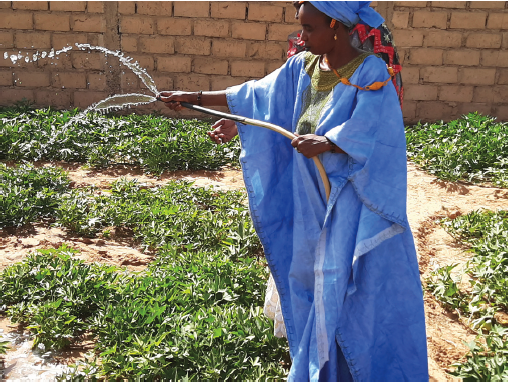 “This is the first time that we have received such a large sum of money from an agricultural production activity,” Maimouna Ciré Ann exclaimed as she described her excitement about being a part of Counterpart International’s Orange Fleshed Sweet Potato (OFSP) pilot project.

Counterpart, through its USDA funded TACSS project, partnered with NCBA CLUSA to promote the local procurement of sustainable and inclusive local value chains. Last year, the TACSS project planted 12 OFSP farms in the districts of Pété , Podor, and Dagana. Currently, 442 families are participating in the pilot project. Maimouna Ciré Ann, chair of the women’s cooperative in her village of Bokké Salsalbé in Pété, is a member of one of those families. So far, she has earned 700,000 FCFA ($1228 USD), contributing to her child’s school canteen and to the overall livelihood of her family of eight.

Originally designed to encourage communities to contribute to school canteens, this activity has unexpectedly become an income-generating activity. OFSP are good sources of carbohydrates, fiber, and micronutrients and play an important role in the Saint-Louis region, where malnutrition rates exceed 20%. Additionally, they help increase income and improve the community’s ability to manage school canteens and malnutrition. Many parts of the plant are edible, including leaves, roots, and vines. The consumption of OFSP leaves strengthens the immune system, contributing to the improvement of nutritional and health outcomes because they are rich in vitamins A, B, and C, and are richer than the white fleshed variety, according to the International Potato Center.

Vitamin A from the OFSP is especially important, as vitamin A deficiency is one of the most prevalent forms of undernourishment in developing countries.

Eight out of the 12 communities where the cultivation of OFSP was introduced had sales of 110,800 cuttings. This amounts to a profit of FCFA 2,216,000 [$3,888 USD], which is a critically important income for these communities, where most of the population works in agriculture. Awa Ba, President of Thialma village, underscored this sentiment, explaining that for his community, “There have been two main benefits from the increase in sales from the cuttings. First, enough product was harvested to cover an area of 0.5ha, to initiate production of OFSP. Second, a sum of 420,000 FCA (736 USD) was raised.”

Reflecting on success of his village’s participation, Awa Ba continued, “Thanks to the profits from the sale of the cuttings, we have been able to pay our often very high water bills to manage the production of OFSP. With this money, we intend to increase the quantity of cuttings, as well as the production of OFSP to generate more income. Some of this funding will also support the school canteen to help our children eat well and succeed in their studies.”

The improvement of the food and nutritional conditions are also evident in the villages of Bokké Salbé, Bokké Diéguess, Perlel, and Meldiam. “We collect the leaves before the sale of the cuttings and these leaves are then shared between the members and used to prepare the leaf sauces called hako and/or Mborokhé in our families,” explains the president of Bokké Salbé.

The OFSP pilot project has proven that it is possible to improve the incomes of local communities, increase contributions school canteens and fight against malnutrition. Although the consumption of sweet potato leaves and the sale of cuttings are an added value for community it is not possible to sustain OFSP farms without the involvement of the entire community. So far, 22 communities with 6250 students are benefiting from the OFSP pilot. With continued support, Community Led School Feeding will be possible in Saint-Louis, Senegal.

The Local and Regional Food Aid Procurement program is a three-year intervention financed by the United States Department of Agriculture (USDA) and implemented by Counterpart International.