When Republic Windows and Doors fired its 250 employees without notice or severance in 2008, they occupied the factory. Now they own it.

“People say to me they don’t think workers can be owners. But I say to them, believe it, because here we are,” worker-owner Arizona Stingley told The Working World, the financer behind New Era Windows and hundreds of other cooperatives that are transforming the landscape of jobs.

“No one else would have loaned money to people like us to do this. But [The Working World] believed in us,” Stingley said.

The Working World is part of a new crop of non-extractive financial institutions slash business incubators that couple loan repayment with startup success, helping co-ops thrive without making workers put down collateral or take on debt.

“There should be a part of capital that acts as a public good—that is not just there for the maximization of profit or investor interests, but for broader community need,” Brendan Martin, founder and executive director of The Working World, said at NCBA CLUSA’s Co-op IMPACT Conference last month.

During a panel called “Co-op Financers Deepen Impact,” Martin and other panelists discussed how lending institutions are responding to the changing needs of cooperative enterprise and working with partners to maximize their impact.

“One of the things that keeps me up at night is whether our resources are going to the places where they’re most deeply needed,” said Annie Donovan, director of the U.S. Department of Treasury’s Community Development Financial Institution (CDFI) Fund, which expands economic opportunity for underserved communities by building the capacity of a national network of community development lenders, investors and financial service providers.

“Because co-ops are a business model that’s already empowered, I know that when resources are going to cooperatives that they are reaching deep into communities.”

Resources coming from co-ops are also reliably impactful, Donovan said. In fact, cooperative financial institutions, or credit unions, account for the highest dollar amount of CDFI investments in persistent poverty counties in the U.S. “In 2015 alone, that was $275 million.”

Partnerships between CDFIs and credit unions are creating a pipeline of financial and technical assistance that is deepening impact. National Cooperative Bank works directly with the National Foundation of Community Development Credit Unions to match their $1 million in secondary capital loans, ultimately bringing twice that amount to low-income community development projects.

“You don’t always think the financing panel is going to get to issues of equity and inclusion, but when you have a co-op impact conference, it does,” said Lisa Mensah, left, who moderated the panel. The partnership works because CDFIs generate flexible capital and share the same values that co-ops do, said Ann Fedorchak, managing director of the Specialty Finance Division at NCB.

“What we end up doing is making loans that other lenders may not be interested in,” said Amy Gales, executive vice president of CoBank’s Regional Agribusiness Banking Group. While CoBank works to manage risk and remain a sound financial institution, it also recognizes that agriculture cycles can be unstable. “We stick by our customers in good and bad times,” she said.

One of the ways cooperative financers can maintain this balance is by seeking out innovative solutions. At Capital Impact Partners, innovation is “baked” into the organization, said Allison Powers, a program officer with the nonprofit CDFI.

“Innovations don’t just fall from the sky. They come from talking with people who are on the ground, identifying gaps and really thinking carefully about what our value add is as a large CDFI,” Powers said. Capital Impact has carved out space as a bridge between cooperatives and foundations that wouldn’t otherwise think to work with co-ops. A recent example is a grant from the AARP Foundation that will support efforts by Capital Impact and the Cooperative Development Foundation to scale the home care co-op sector.

While individual sectors work to scale, co-op financers are facing the same challenge: how to leverage their resources and maximize their impact. “We need a lot more capital acting in the public interest,” Martin said, noting that co-op financers are a drop in the bucket of mainstream lenders.

Donovan agreed, adding that the capacity is there to double or quadruple the amount of resources coming into the CDFI Fund (currently $250 million). Still, “we may be a small part of the financial sector, but we do punch above our weight,” she added.

There’s a cultural dynamic at play when it comes to scaling non-extractive lending, Donovan said. “We live inside an economy, but also a culture, that seemingly values individualism. But people coming together to cooperate is what moves us and makes us successful as a country. We have to be working against the default story, and that’s hard work, but we have to keep doing it,” she said.

Lisa Mensah, who moderated the panel and serves as president and CEO of Opportunity Finance Network, said she’s “confident that we can, as a country, harmonize our narratives of individual responsibility and community strength.” 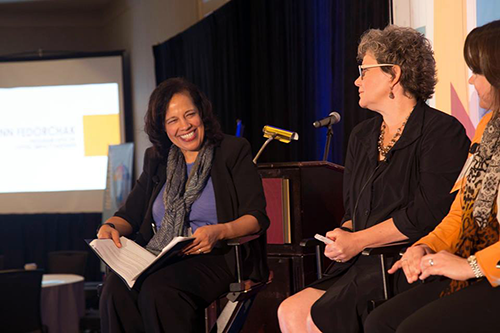