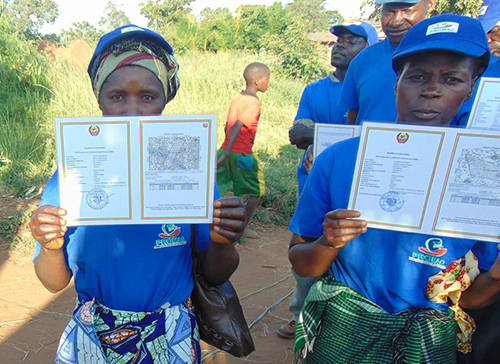 At an April 21 ceremony, 29 farmers—almost half of whom are women—received government-issued land titles. The group is part of a larger unit of 402 farmers whose land rights have been submitted to Mozambique’s Provincial Geographic and Cadastral Services for official processing.

Paulo Auade, governor of Mozambique’s Tete Province, attended last week’s ceremony and called NCBA CLUSA a “partner” with the government in securing land rights, which he said reduce conflict and allow farmers to preserve their land for future generations.

By its close in 2017, PROMAC aims to acquire close to 3,000 land titles, securing property rights for 2,920 families. The land titles are permanent, and a transfer can occur only if initiated by the family, said Carolina Reynoso, senior operations manager for NCBA CLUSA in Mozambique.

Direito de Uso e Aproveitamento dos Terras (DUATs), or “right to use and benefit from land” certificates are coveted in Mozambique, where land concessions have displaced thousands of farmers. Land registration not only secures farmers rights to their property, but also creates an incentive to invest in land improvement, soil conservation and new technology.

In addition to providing support, PROMAC funds each land title, Reynoso said. “The entire process to obtain an individual land title costs $481″—a cost that far exceeds the budget of a typical rural smallholder farming family.