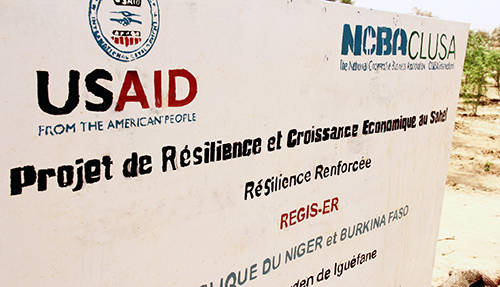 A new partnership between NCBA CLUSA’s USAID-funded Resilience and Economic Growth in the Sahel – Enhanced Resilience (REGIS-ER) project and the World Food Programme (WFP) in Niger is bolstering efforts to reduce food insecurity in Sabon Machi.

A rural commune in southern Niger, Sabon Machi is home to a particularly vulnerable population where United Nations agencies, the Government of Niger, NGOs and other actors are pooling resources to build resilience.

“This concerted effort combines the resources of WFP and REGIS-ER to increase the number and scope of activities that have a sustainable impact on improving the resilience of the target community,” said Amath Diop, NCBA CLUSA’s deputy chief of party for REGIS-ER.

The partnership aims to increase the resilience of 1,829 vulnerable households in 48 villages, reaching a total of 12,803 people. Specifically, REGIS-ER and WFP will reclaim more than 9,000 acres of degraded farmland, introduce the practice of conservation farming on more than 400 acres and support the planting of 68 home gardens.

The partnership is also supporting the traditional practice of habbanayé, in which initial livestock are provided to a beneficiary by the project, while the livestock’s offspring are later distributed to other beneficiaries. NCBA CLUSA provided a breed of red goat that reproduces quickly, enabling vulnerable communities to build assets over a short period of time.

“The yields were so impressive that people throughout the commune considered it worthwhile to collaborate with the project,” Fadji told local project staff.

“[REGIS-ER] has changed the lives of people in our community and is now increasing its impact, thanks to this partnership with the World Food Programme,” he added.

REGIS-ER is part of USAID’s “Resilience in the Sahel Enhanced” (RISE) Initiative, which is committed to reducing the vulnerability of target populations in the Sahel region. This five-year, $70 million project addresses the root causes of chronic vulnerability in Niger and Burkina Faso, while promoting economic resilience. REGIS-ER is empowering local communities with the tools and knowledge necessary to adapt to climate change, withstand food crises and improve nutrition, especially among children under five. The project is expected to impact an estimated 2 million beneficiaries by its conclusion in 2018.