When Oscar Mayer shuttered its headquarters in Madison over the summer, it signaled the end of nearly a century of making hot dogs and left hundreds of longtime workers in the city’s East Side—where the factory had been a fixture since 1957—unemployed and without benefits.

“All we were left with were the wienermobiles,” said Mayor Paul Soglin.

The closure of one of Madison’s flagship companies is part of a plan by parent company Kraft Heinz to phase out seven Oscar Mayer factories in the U.S. and Canada shortly after the two food giants merged.

“That experience tells me that if I want to invest in staying power in terms of economic development, I want locally-owned businesses. One assurance that a business will stay local is that it is a worker-owned cooperative,” Soglin said. “Those 3,000 workers—if they had owned Oscar Mayer—would not have voted to run an outdated plant, slash the workforce and then move to Davenport [Iowa],” he added.

Instead, they might have ended up like Madison’s Union Cab, a worker-owned cooperative that opened for business in 1979 with just eleven cabs and today operates the largest taxi fleet in the city, creating living wage jobs and providing 400,000 rides annually.

Soglin, now serving in his 20th year as Mayor of Madison, Wisconsin, was part of a panel called “Mayors and City Leaders: Harnessing Co-ops for Local Impact” at NCBA CLUSA’s Co-op IMPACT Conference in Alexandria, Virginia, this month.

Exploring the intersection of community economic development and cooperatives, the panel made the case that co-ops are, as panelist Stacy Sutton put it, “engines of equity.”

Sutton, Assistant Professor of Urban Planning and Policy in the College of Urban Planning and Public Affairs at the University of Illinois at Chicago, is behind forthcoming research that identifies the extent to which U.S. cities provide enabling environments for co-op development. Her benchmarks include everything from adopting co-op-friendly legislation to promoting awareness of worker co-op conversions—all with the goal of making co-ops second nature as a policy solution for city and municipal leaders.

“Not every city has the culture of Madison in terms of a long tradition of cooperatives, but that doesn’t mean you can’t enter the conversation now,” she said.

One city that has made strides for worker co-ops in recent years is New York City. But it hasn’t been an easy process, even under favorable leadership like Mayor Bill de Blasio, said Councilmember Helen Rosenthal, who represents New York City’s Upper West Side and also spoke on the panel.

Still, “you can’t imagine the pushback I got,” Rosenthal told IMPACT 2017 attendees. Mayor de Blasio was predictably on board, but only found out about the legislation at the bill signing—Rosenthal’s ‘told you so’ moment with the bureaucrats who had been holding her back.

“We had a mayor who was talking about income inequality, a tale of two cities. And here was an economic business model that could lift people out of poverty and dead-end jobs and into the middle class,” she said.

Learning how to navigate the bureaucratic landscape and identify those confluences is key. Sometimes government can seem “obtuse,” Sutton said, but “it’s really just a set of people and a set of relationships and finding the champions in that space.”

The results can be impressive. Since 2014, New York City has invested $8 million in community groups that cultivate worker co-ops. That effort has resulted in 75 new worker co-ops and 500 new jobs. Even now, Rosenthal said, New York’s Transit Union is considering a plan that would organize school bus drivers as a cooperative.

Labor unions, Mayor Soglin said, are a “natural ally” of co-ops. “We just have to ask the question, ‘Why are they working for someone else, when they could be part of a worker cooperative?’”

One reason might be the notion that everyday people aren’t cut out to be entrepreneurs. But according to the Kaufman Foundation, small businesses—a category that includes many co-ops—account for most of the growth of new jobs in the U.S.

“Entrepreneurship is not the exclusive province of capitalists,” Soglin said. “The people you know are capable of running a business.

The ordinary people in your community can be giants.” 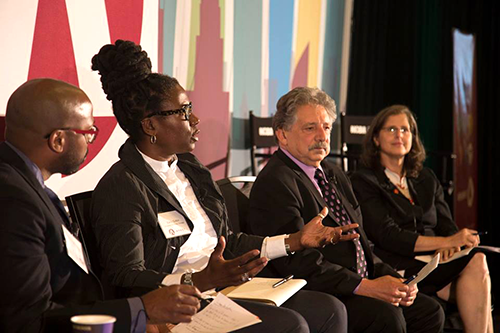