The trend comes after decades of rural to urban migration by youth, who, frustrated by outdated, time-consuming farming methods that produced low yields, abandoned agriculture. This left older generations largely responsible for production, jeopardizing the future of farming, agricultural development and food security in the country.

Kenneth Kiiza is part of this growing community of Ugandan youth giving agriculture a second chance by investing in new farming methods that reduce labor and double yields. His day begins at 6 a.m., when he wakes up and heads to his neighbor’s house to rent a pair of oxen. From January to March (and again in July and August—Uganda has two growing seasons), Kiiza spends the daylight hours ripping—a minimum disturbance method of tilling introduced by NCBA CLUSA—and dreaming of the day he’ll be able to afford his own bulls.

Kiiza completed NCBA CLUSA training as a Tiller Service Provider (TSP) in 2013. At age 21, he’s the youngest TSP in Masindi, a district in west-central Uganda. He’s now passing on the knowledge to several members of his youth co-op, Kidwera II Youth Farmers Cooperative, where 24 out of 30 members are already practicing Conservation Farming.

Before he adopted CF practices, Kiiza said he spent three to four days preparing one acre of land for planting by digging basins—a tedious, time-consuming process done with a traditional hoe. Now, it takes him three hours to rip and plant one acre, a service he offers to local smallholder farmers for USD$3.64 (10,000 Ugandan shillings).

“It used to take so much time and energy to till,” he said. “The work is still hectic, but now it is enjoyable.” Not to mention rewarding. Using CF practices, Kiiza is harvesting 20 to 28 bags of maize per acre, where previously he would yield only seven to ten bags.

As neighboring farmers observe the benefits of CF, Kiiza said he has seen demand for ripping grow, especially among young people. “Most of the people I train are my age,” he said. 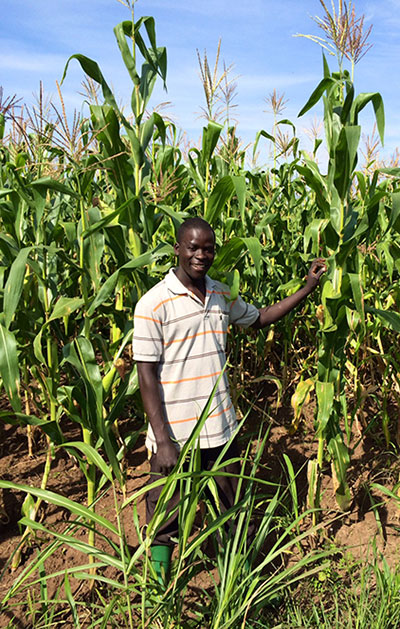 Kiiza was also selected to receive additional training as a community-based service provider (CBSP) to help solve a persistent problem: weeds. The CF principle of organic crop cover advocates mulching to retain soil moisture and smother weeds, but for farmers who don’t have a previous season’s crop residue, mulching can be difficult, making the application of herbicide imperative to achieve optimum results.

Counterfeit herbicides plague smallholder farmers in Uganda, making Kiiza’s services invaluable. He is able to distinguish fake from genuine herbicides and is trained in the proper mixing and application of herbicides.

Currently, Kiiza has 22 clients, each of whom he charges $5.45 (15,000 shillings) to spray one acre with herbicide. Kiiza provides the water and offers technical advice on herbicide selection, while the farmer has the option to purchase the herbicide or pay extra for Kiiza to provide it.

When he first began, Kiiza said many farmers chose the cheapest herbicides and yielded predictably lackluster results. “They would ask me, ‘What is the trick behind your demonstration garden?’” The question gave Kiiza an opportunity to explain the benefits of investing in higher quality herbicide.

“The herbicides are now working well, and farmers are seeing the good results,” he said.

As CF gains traction in the region, Kiiza said he feels emboldened to expand his services and is able to save more money—a noteworthy statement in a country without a strong culture of savings. A decades-long insurgency by Joseph Kony and the Lord’s Resistance Army in Northern Uganda displaced more than 2 million people. The unstructured environment of refugee camp life produced a generation of young people who grew up without the benefit of a strong education, job experience or financial literacy.

Kiiza has currently saved $290 (800,000 shillings). He diligently deposits his earnings into a savings account with Stanbic Bank, part of Standard Bank Group, Africa’s leading banking and financial services organization. He needs to rip 50 more acres to be able to afford his own oxen. A pair of bulls capable of pulling a ripper costs between $290 to $327 (800,000 and 900,000 shillings), and Kiiza doesn’t want to exhaust his savings.  To supplement his income from agriculture, Kiiza has undergone training to repair rippers and build oxen yokes for fellow TSPs and smallholder farmers. Eventually, he wants to open a full-time workshop where he’ll manufacture and maintain rippers and other farming equipment, allowing him to meet growing demand for oxen and CF ripper points.

Kiiza is optimistic about the opportunities in agriculture for young people in Uganda. “The future is there. The only challenge is money. You need to own your own oxen, and they are expensive,” Kiiza said. He understands the hard work and commitment it takes to find success, and knows that many Ugandan young people are instead looking for quick money.

Still, his peers are observing his success and expressing interest. “Many young people join [Kidwera II] because they’ve realized that membership provides linkages to many opportunities they wouldn’t otherwise have—especially access to financial institutions,” Kiiza said.

And financial linkages are crucial for young farmers in Uganda. Like many of his peers, Kiiza is responsible for supporting his siblings. He provides for his two younger brothers and five younger sisters, and uses a portion of his earnings to cover their school fees.

He wants a good life for them, but more broadly, Kiiza hopes his efforts contribute to a better future for Uganda. “I want to continue to help others to build their income and gain food security,” he said.