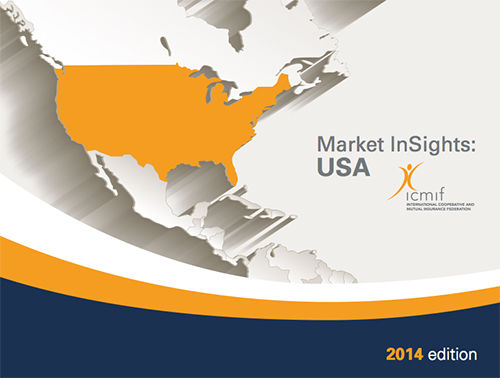 Since 2007, the mutual and cooperative model has been the fastest-growing part of the U.S. insurance market, growing 30 percent between 2007 and 2014, compared to the 3 percent growth rate experienced by the non-mutual U.S. insurance market. New research from the International Cooperative and Mutual Insurance Federation (ICMIF) indicates that this trend continued in 2014. The ICMIF report also reveals that NCBA CLUSA member Nationwide is now the fourth largest mutual life insurer in the U.S. A press release from the best practice organization follows:

The U.S. mutual* insurance sector reported another record year in terms of premium volume and market share in 2014, according to the latest research from the International Cooperative and Mutual Insurance Federation (ICMIF).

The Market InSights: USA 2014 report from ICMIF shows that U.S. mutual insurers collectively wrote a record USD $475 billion in premium income in 2014, a growth of almost 30 percent from pre-crisis premium volumes (2007: USD $369 billion). In comparison, the U.S. insurance market grew by a total of 3 percent between 2007 and 2014, making the mutual sector the fastest-growing part of the U.S. insurance industry since the financial crisis. As a result, mutuals’ share of the total U.S. market increased from 29 percent in 2007 to a record high 37 percent in 2014.

ICMIF’s research also found that the U.S. mutual insurance sector is the largest mutual market in the world in terms of premium income, contributing around 36 percent of the global total. It is also one of the largest global markets in terms of mutual market share, with around 1,800 mutual insurance companies serving 330 million members/policyholders in 2014. The U.S. mutual sector has been one of the fastest-growing in the world, as growth of the mutual market has exceeded the rest of the U.S. market in six of the previous seven years.

The latest report from ICMIF on the U.S. mutual insurance sector includes a year-on-year analysis of the premium and market share growth of the mutual sector since 2007, with comparison to the rest of the U.S. insurance sector. The report also includes analysis of premium growth by line of life and property and casualty (P&C) business, asset growth and investment breakdown, and a definitive list of the 30 largest mutual life and P&C insurers by 2014 premium income.

The Market InSights reports are a series of market-specific reports compiled using the latest data from ICMIF’s Global Mutual Market Share research, a market intelligence report on the size and performance of the global mutual and cooperative insurance industry. The latest research highlights that the mutual and cooperative model represents more than 27 percent of the global insurance market by premium income and has been the fastest-growing part of the global insurance industry since 2007.