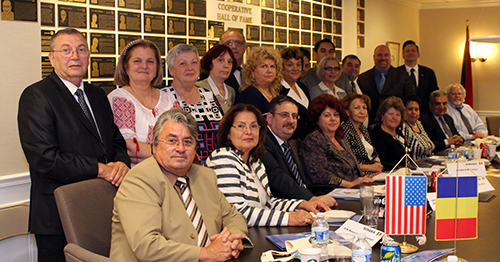 Representatives from the Bucharest-based National Union of Handicraft and Production Co-operatives of Romania and the country’s Ministry of Economy Department of Foreign Trade met with NCBA CLUSA leadership last week at the organization’s headquarters in Washington, D.C.

The delegation—fresh from a visit to a large textile trade show in New York—stopped in the nation’s capital to discuss potential partnership with the U.S. cooperative sector.

“We would like to determine the possibility of collaboration, identify partners, see directly some market trends—especially in textiles—and learn more about your cooperative system,” said Cristian Mateescu, vice president of the National Union of Handicraft and Production.

The visit continues a trend toward greater collaboration between the global cooperative community and the U.S. as a leader in the cooperative development sphere. NCBA CLUSA has previously met with similar delegations from Puerto Rico, Turkey, and Israel, and groups from India and China are finalizing preparations for upcoming visits.

“We are always excited to learn from others within the co-op community,” said Mike Beall, president and CEO of NCBA CLUSA. Beall offered a welcome and overview of cooperative development to the Romanian delegation. He also addressed the challenges and opportunities faced by the two countries’ respective cooperative movements.

Some challenges overlap, such as finding a specialized work force and securing access to financing. Others disproportionately complicate the cooperative landscape in Romania.

Co-ops in Romania do not enjoy tax-exempt status, as they do in the U.S. A request is now pending in the Parliament of Romania to eliminate this “double tax,” which taxes both co-ops and member-owners for the same profits, said Valentin Brebenel, deputy general director of External Bilateral Relations for Romania’s Ministry of Economy, Department of Foreign Trade.

Land ownership poses another dilemma for Romanian co-ops. In 1999, land was consolidated, but original landowners still own homes and often businesses on now-disputed land. Proposals to change laws governing land ownership and use are underway, but tensions between the appropriate use of private and public property remain.

“Our challenge is to prove that cooperatives have a social purpose and a public purpose,” Brebenel said.

Both Romania and the U.S. also struggle to redefine ‘cooperative’ and overcome the word’s historically negative connotations. This is especially true in Romania, Brebenel said, where memories of forced collectivization during the Communist regime “are still vivid.”

With cooperative membership trending older in both countries, the Romanian delegation was keen to know how U.S. co-ops are appealing to younger generations.

In the U.S., Beall said, many young people “talk about what they would like to see in a business and describe a co-op without exactly knowing what one is.” Younger generations tend to seek out business that are socially responsible, local, organic, fair trade and democratically controlled. Co-ops fit perfectly into that space, he said.

The cooperative movement in Romania dates back to 1879. Today, it employs 16,000 skilled workers and represents more than 500 associate members. Some 400 cooperative businesses across the country export textiles, furniture and handicrafts to 13 countries in the European Union.

With their shared interest the economic viability and social responsibility that co-ops embody, Mateescu said, Romania and the U.S. are uniquely positioned to collaborate.

“We share the same values, principles and points of view about doing business in a way that respects social responsibility and environmental awareness,” he said.

“We share a keen interest in establishing a formal working relationship with cooperatives in Romania. Both parties are making it a priority to make this a reality going forward,” Decker said.