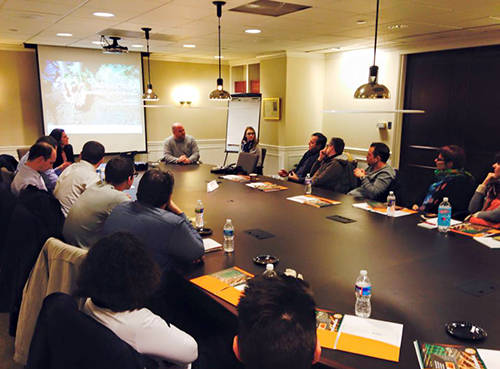 On February 25, NCBA CLUSA hosted a group of MBA students from Zurich, Switzerland participating in a Marymount University exchange program. Dr. Günther Singer has been bringing his students to NCBA CLUSA’s office during his exchange trips over the past few years to introduce them to cooperative business in the United States.

One student, a site manager for Migros—Switzerland’s largest supermarket chain and the world’s 6th largest retail cooperative, according to the International Cooperative Alliance’s 2014 World Cooperative Monitor—noted the major difference: “Cooperatives are run like a regular business, but at the end of the day, the money goes not to shareholders but to the customers and the workers,” he said. “This mindset is very important.”

Mike Beall, president and CEO of NCBA CLUSA, talked to the students about the cooperative movement in the U.S., which includes more than 40,000 cooperatives and employs over 2 million people. “There’s often a perception that cooperatives are less business-minded, but it just isn’t true,” Beall said. He explained how cooperative business has gained steam throughout difficult periods in U.S. history, such as the Great Depression of the early 1930s and the recent recession in 2008. “Difficult times actually promote the cooperative model,” Beall said.

“A lot of young people are looking for alternative models in business and other ways to engage in the economy that are more socially responsible,” said NCBA CLUSA COO for International Development Amy Coughenour.

Beall noted that one of the exciting ways young people are embracing the cooperative business model is through the establishment of beer cooperatives—more than 50 brewing co-ops are forming in the U.S.

The conversation continued with discussion around cooperative-sector success stories in the U.S., such as the U.S. credit union system, which boasts more than 100 million members and safeguards $922 trillion is savings; and electric cooperatives, which provide power to 75 percent of the U.S. landmass, employ more than 70,000 people and contribute $19 billion to the U.S. economy. CHS Inc., the largest agricultural cooperative in the U.S., serves more than 600,000 farmers from 1,100 member cooperatives and, in 2013, returned an estimated $433 million back to its co-op members.

Some of the challenges facing both the U.S. and global cooperative communities were also discussed with the students, such as strengthening cooperative laws, developing better strategies for educating the public about cooperatives and creating more educational opportunities in cooperative business.

NCBA CLUSA looks forward to its visit from Marymount University’s Swiss exchange students every year as an opportunity to introduce them to the unique aspects of the cooperative business model and the global cooperative movement.